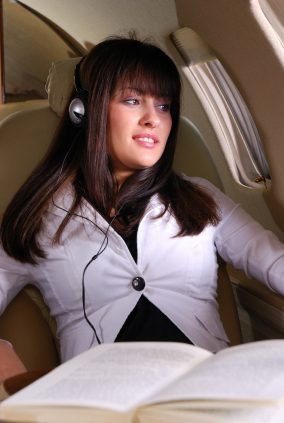 One curvette’s hunt for light lesbian fiction in a sea of chick-lit and bodice rippers.

Recently, as I was languishing in a three-hour layover, my half-hearted quest for reading material led me to an airport bookstore. Titles vetted for jet-setters of every stripe lined the shelves: Farsi acquisition, all manner of Dan Brown derivatives, marketing how-to’s and, of course, (very) popular fiction. Forty-five minutes later, two books had made it into the crook of my arm. The first, a whimsical piece about a well-to-do Seattleite who lost, found and discarded her man, in search of better things. The other was about a guy trying his damndest to shake his ruinous addictions. You know these sorts of books: One is part of the “chick lit” genre, infamous for its tales of cocktails and designer handbags. The second is harder to categorize, perhaps part of the prolific “manly tale of undoing” genre, wherein the cocktail to handbag ratio generally skyrockets.

So, which one of these literary gems would earn my $15? I ended up opting for the $4 bag of M&M’s, at a fraction of the price and double the relevance.

With entertainment budgets shrinking nationwide, every nonessential item you fetch to the register has got to “work it.” My standards have become a little higher, and a lot queerer. I’m a jet-setting chick who likes chicks, and it’s going to take something a little more lesbian-focused to make me forget my two inches of legroom and the potential 30,000-foot icy freefall.

When I landed in Portland, Ore., I was still wondering whether there was such a thing as chick lit for queer chicks, so I went to the famous Powell’s Bookstore for a novel that would fit the bill: contemporary, funny, optimistic, romantic, honest and rather gay. Would I get an intrepid narrator singing the praises of her Keens and Eddie Bauer passport pouch, the better to woo advertising copywriters and investment bankers? Or would my lesbian hero fret about love handles, haystack hair and whether her partner wants kids?

As it turns out, my local bookstore sees chick-on-chick-lit as a tricky proposition. The fiction section was a wash, but the queer studies corner turned up perennials like Ann Bannon’s half-century old Beebo Brinker Chronicles and some heartbreak-soaked Jeanette Winterson. More favorites included Kathryn Forrest’s classic romance Curious Wine, about passion combusting in a log cabin, and a string of lovingly produced novels of lesbian eros by author Radclyffe. Good stuff, but not quite what I had in mind.

Brenda Knight, Associate Publisher at queer imprint Cleis Press, points out that lesbian chick-lit is a little more subtle than its cosmo-swilling straight cousin. The attraction—and curse—of straight chick-lit might be that it relies heavily upon “socially approved fetishes” like obsessions with name brands and the importance of marriage before 30. You’re not likely to read a novel about a thirtysomething lesbian fretting about who’s going to marry her? And it isn’t chick-lit if the heroine is fretting about whether she can get married. Knight proposes that the queer chick-lit genre prizes plot and character over “what happened between going to Barney’s and lunch at The Four Seasons.”

But, even when it’s relegated to the gender studies corner, actual queer chick-lit seems to be at risk of getting squeezed out, between torrid tales of soaked sheets on one side and graduate theses on the inherent gayness of super heroes on the other. I still can’t find my airplane reading, but I can study up on “gay vague.”  However, a little more digging reveals author Tracey Richardson’s Side Order of Love, featuring a golfer and a caterer managing their love and careers. That’s it! No suicide pacts, no desperate nights in log cabins, no silhouettes of women embracing on the cover. Also promising was Brenda Brooks’ Gotta Find Me An Angel, which tempers its lovelorn protagonist’s quest for romance with the realities of having an obnoxious roommate. These chick-lit titles are some of the few I found that are “passing” as queer lit.

After hours lost amongst the shelves I’m wondering whether queer authors would rather see their works join the ranks of notorious pastel covers with shoes on them instead of abutting books on queer cinema. Paula Offutt’s Butch Girls Can Fix Anything, for instance, is a story of love lost and redeemed in small-town America. Is it chick lit? “I don’t mind if someone puts it in that genre box. I’d prefer they didn’t since I am not overly fond of that term—chick-lit sounds silly—but there are as many different ways to interpret a book as there are readers,” she opines.

Andrea Askowitz, writer of a memoir-style story about pregnancy declares, “I would love for My Miserable, Lonely, Lesbian Pregnancy to qualify as chick-lit. Why not? It’s totally a woman’s book about a woman and her relationships.” Not a stiletto or daiquiri in sight—but she has a point: why shouldn’t it be considered chick-lit?

After all, Manolo Blahniks and martinis are so 2008.