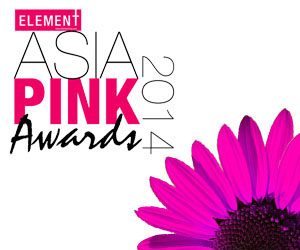 In Singapore despite the State’s Anti-gay Law.

The 1st  regional LGBTQI Awards event in Asia is gaining steam with 10 individuals’ recipients, 3  corporates’ recipients, Sebastian Castro as Master of Ceremony and participation from regional  LGBTQI organizations namely Shanghai Pride, TAPCPR and corporate allies namely Barclays, Fred  Perry, VISA, Unilever, Goldman Sachs etc.
Singapore, 3rd  March, 2014 – Asia Pink Awards 2014, the 1st regional LGBTQI Awards event, is  gaining steam with exciting developments that will mark a successful event that comes against the  backdrop of the emergence of a progressive Asia.
On 16th  March, the Awards will announce 10 recipients from the individuals’ category and 3  recipients from the corporates’ category chosen by a distinguished panel of judges. The event will  take place in a private gallery, named Dream Factory. Ines Ligron, a French fashion and beauty expert,  sponsored the venue for the event said, “I’m excited to have the event here. The Awards shows that  anyone can stand up and fight for what’s right because these recipients come from all walks of life;  politician, lawyer, social worker, activist, pastor, celebrity”. The event will also be live-broadcasted  on Moovz.com, a global LGBT social-networking platform.
Highlights of the event include the role of the Master of Ceremony which will be held by Sebastian  Castro, the hunk most known for his music video “Bubble” that went viral on Youtube. Paolo  Ferrarini, a popular singer in the Italian LGBTQI community, will also be performing songs from his  new album at the Awards ceremony.
There will be six well-established LGBTQI organizations from all over the region who will be  speaking at the pre-Awards seminar which takes place in the afternoon prior to the Awards. There will  be participation from Shanghai PRIDE (China), TAPCPR (Taiwan), Community Business (Hong  Kong), Free Community Church (Singapore) etc. Through the seminar, the event will also encourage  exchange of experiences, lessons learnt and best practices in terms of LGBTQI rights movement in  Asian countries.
Already, many corporate allies are also confirming their attendance to celebrate “an inclusive Asia”  via the Awards platform, including Barclays, Goldman Sachs, Fred Perry, VISA, Unilever, BP Oil etc. But if you think local Singapore companies are not part of the event, local entrepreneurs such as Eugene He, CEO/Founder of Tek Eight Laboratories, Edison Ong, founder of Letat Agencies, a  multiple liquor distributor and David Tan, CEO of Hannah Holdings, will tell you that they have  sponsored the event.
The Awards Ceremony is also a fund-raising event for Action For AIDS (AFA) Singapore. The  proceeded will be used to support HIV/AIDS Patients who can’t afford medication bills.
The Awards ceremony will take place in the evening followed by an after-party sponsored by  Plun.asia, too. It also works with Galerie & Sogan Art to host a mini-exhibition concurrently called  “Can You See Me” for 2 weeks.
Hiro Mizuhara, Associate Publisher/Creative Director of ELEMENT said, “This is a great opportunity  to network and witness a milestone in the Asian LGBTQI community. The Awards is primarily a  platform to pull focus and for the LGBTQI Asian community to remain salient in the public sphere”.