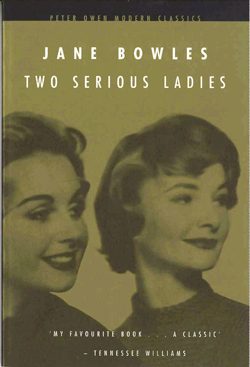 1. Two Serious Ladies, Jane Bowles: This early postmodern stunner features the eponymous two ladies: an uptight woman who becomes a courtesan and a wealthy woman who falls in love with a prostitute. Anaïs Nin was seriously jealous of Bowles, with good reason.

2. Nightwood, Djuna Barnes: Lyrical prose that cuts right to the heart of troubled relationships. This book, published in 1936, is dysfunctionally addictive enough that you’ll devour Nora and Robin’s love affair from the start to the elliptical, fascinating end.

3. The Passion of New Eve, Angela Carter: Published in 1977, this fantastical trans-dream of a novel calls into question gender, Hollywood and Western culture itself. Unmissable, full of mind-blowing imagery, multi-nippled goddesses and a feverish new American mythology.

4. Affinity, Sarah Waters: Waters is best known for Tipping the Velvet and Fingersmith, but Affinity is her darkest and most underappreciated novel. The literary equivalent of The Prestige by Christopher Priest, it had me fooled long before the reveal. “I’m very fond of Affinity,” the prize-winning author told curve. “I think in some ways it’s the most interesting of my novels.”

5. The Child Garden, Geoff Ryman: A futurist fantasy by the gay writer Geoff Ryman about a lesbian relationship between a woman and a female polar bear. It’s set in post-apocalyptic London. Truly, blazingly brilliant.

6. Biological Exuberance, Bruce Bagemihl: This ground-breaking nonfiction book about homosexuality and bisexuality in the animal kingdom will provide many a queer girl with good fodder for conversations about the “naturalness” of heterosexuality.

7. Fair Play, Tove Jansson: This final novel by Finno-Swedish author Tove Jansson, creator of the beloved Moomintroll books, details with wit and spark a relationship between two artistic old women. Lesbian author Ali Smith says in the introduction: “It is mystifying that it’s taken so long for so much of Jansson’s very fine adult writing to have English translation but it’s made the discovery of perfectly made, beautifully judged novels like Fair Play akin to coming across unearthed treasure—what a find.”

8. Absent Kisses, Frances Gapper:  A collection of amazing experimental (and mostly lesbian) short stories that are full of surreal, sly and gentle British wit. When pressed, Gapper described her book to me as “a book about half-human and half-something-else things.”

9. The End of Gay: And the Death of Heterosexuality, Bert Archer: This book challenges modern constructions of gayness and should be read by all young queerlings, whether they’re immersed in a queer studies degree, with a head full of Foucault, or they just want something interesting to say to their next date.

10. No Priest but Love: Excerpts From the Diaries of Anne Lister, Anne Lister: A raunchy, moving, empowering journal from the early 19th century. These are the experiences of a woman leading a shamelessly passionate lesbian life. My favorite is Lister reveling in her delight at sticking her hand up another woman’s petticoats.