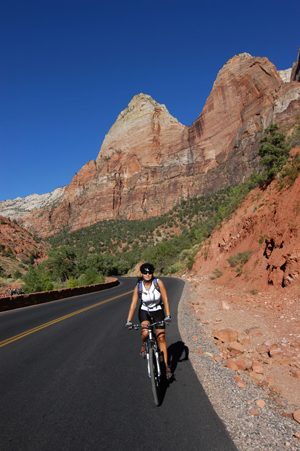 One woman’s journey from Vancouver to Tijuana.

I liked the idea of it: border-to-border, Vancouver to Tijuana, by bicycle. I ignored the details: the 1,847-mile route and the fact that I’d never pedaled more than 25 miles in a day.

The recommended training for self-supported bicycle touring consists of doing at least three rides a week, gradually increasing the distances, for two months. It can also include weighing down the bike with textbooks to simulate the load you’ll carry.

Instead of training, I immersed myself in researching and buying gear: a new Bianchi Volpe, clipless pedals and shoes, an expensive seat, an odometer, two pairs of spandex bicycle shorts, gloves and sunglasses.

Other than a few articles of clothing, a journal and a book, I carried little else in my panniers, the saddle bags attached to racks on the front and rear wheels. Some travelers, especially those riding mountain and racing bikes, choose to pull their gear in a trailer.

Despite their touring experience, none of my three companions had trained either, so we set off from Vancouver at a leisurely pace to ride ourselves into shape.

As a reward for our first week of exercise, I suggested a stopover in Seattle to watch a campy lesbian soccer tournament, the Festival of the Babes.

Being afraid of saddle sores, and being physically unfit, I focused on the prize—attractive, half-naked women.

Fully loaded, my bicycle weighed an extra 45 pounds, with a tent, ground pad and sleeping bag strapped to the rear rack, and it drove more like a Cadillac than a Porsche. On the first day, with my hands clenched as I crossed Greater Vancouver’s imposing Pattullo Bridge, I realized the gravity of our undertaking: We would cover every inch of land, every bridge, every obstacle on our route.

But moving at speeds closer to walking than driving, we also had the opportunity to absorb our surroundings—the placid inlets of Puget Sound, the lush greenery of late summer, the apples hanging from branches. To the whirring sound of spinning tires, we pedaled over rolling hills and through tunnels of trees, where shadows of leaves danced on the pavement. Always hungry, we snacked on protein bars, high-calorie trail mix and all the blackberries we could pick.

Five maps from the Adventure Cycling Association, a bicycle travel organization specializing in self-supported tours, laid out our Pacific Coast course. The maps function like a Dummy’s Guide to Route Planning, including turn-by-turn directions, mileage markers, elevation maps and a legend showing campgrounds, motels, hostels, bike shops, restaurants and grocery stores. Some state transportation departments will send bicycle-friendly maps to those who inquire, and some cyclists use maps designed for car travel, but with a network of 37,210 miles, Adventure Cycling is the best bike-touring resource I know of.

After the stop in Seattle, our average miles per day increased from the mid-20s to the mid-30s. My morning soreness abated faster with every new day as my seat molded to my body and my body molded to my bike. In southern Washington, we passed through small towns with coffee shops offering senior citizen discounts and roast beef specials. Rain chased us along the Columbia River, through territory charted by Lewis and Clark, to the mangrove trees and salty air of the sea. We reached the milestone of the Pacific Ocean and turned left.

The elevation map of Oregon has spikes indicating climbs of 200 to 1,000 feet for nearly 400 miles.

For entire mornings, our speedometers hovered under five miles per hour, our thigh muscles strengthening as we taught our bodies to climb. Pedaling in the lowest gear, the “granny gear,” was physical work, but the real challenge was mental. Sitting all day, my thoughts were constant, the mind-chatter all about getting to the next hill or bend, until eventually the never-ending nature of the road lulled me into the present.

The coast of Oregon is rugged and lined with sea stacks, huge chunks of land sculpted by erosion. Sand dunes, mounds of sand that drift like glaciers, stretch down from the north. Recreational ATVs are popular for exploring the dunes, and we often heard them buzzing in the distance while we camped in state parks. At night, we left our bikes leaning against the picnic table by our tents. Everything we needed was there with us; our only concerns were eating, sleeping and pedaling.

To recharge, we stayed in hostels and motels, but it was at the campground hiker-biker sites that we met other bike travelers: a husband and wife who took turns pulling their toddler in a trailer, a Texan who had a route touching the four corners of the United States, a man riding to raise funds to fight lymphoma. Individual rides for philanthropy are not uncommon; all you need is a journey, a cause, a sign for your bike and a fundraising webpage (available at firstgiving.com).

In Northern California, we entered the Avenue of the Giants, a 32-mile stretch of old Highway 101 running through Humboldt Redwoods State Park.

Cruising underneath a canopy of the world’s tallest trees, some 200 feet high and 15 feet wide, my companions and I looked like dollhouse toys. We rode alongside the ferns, huckleberry and poison oak that make up the understory of the old-growth forest, touched by the majesty of the ancient redwoods.

My three companions ended their journey in San Francisco, where Josie, a hard-core cycling friend, joined me. Outside a supermarket near the curving beach of Half Moon Bay, we met a fellow two-wheeled traveler. Tom, the bicycling comedian, started touring in 1987 and has covered 140,000 miles. He has biked to every state, even pedaling a stationary bike to Hawaii via cruise ship. He makes his living by riding his bike to venues where he performs his stand-up comedy and shows slides of outlandish street signs.

Keeping in mind that every mile traveled off-route is a two-mile detour, Josie and I stopped at the most convenient gay venue, the nautically themed Friendship Bar (now the Hideout) in Santa Monica. By then, I’d discovered that the key to feeling comfortable in spandex is to never look in the mirror, and there were no other women at the bar to pass judgement on my fluorescent yellow jersey that cold Wednesday afternoon.

Continuing on the 22-mile South Bay Bicycle Trail, we passed the workout area of Venice’s Muscle Beach, the glass shorefront houses of Manhattan Beach and the miles of volleyball nets staked into the sands of Hermosa Beach and Redondo Beach.

The signs for Mexico appeared near San Diego, after I’d had nearly 200 hours of saddle time to envision crossing the border. I imagined ripping off my jersey and launching my fist into the air, or falling to my knees and letting a handful of dirt stream through my fingers.

But the drama of a grand finale was lost somewhere along a trail of triumphant moments: changing a tire in the rain, climbing a seemingly insurmountable hill, reaching the 1,000-mile marker.

Surrounded by border congestion, I methodically removed the panniers, and, using my undeveloped arms, struggled to hoist my bike over my head