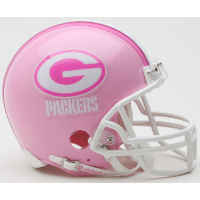 I love football. I have ever since I was little.

I would play tackle football with my brothers and their friends at the playground just to prove that I was as good as they were despite being a girl.

I didn’t want them to see my sex; I wanted them to see my talent.  I guess that why’s I can relate, to some extent, to those football players who are still in the closet.

There is this living stereotype that football is a “man’s game” and only “manly men” can play it and play it well. This is concept that is continually reinforced by football analysts, players and coaches. It’s also pounded into our brains through NFL marketing and television commercials.

That’s why I have always wondered what would happen if a popular and talented professional football player such as Peyton Manning or Brett Favre came out of the closet. What would the ripple effect look like? Would former Kansas City running back, Larry Johnson be so quick to blurt anti-gay slurs at disgruntled fans?

I know that Peyton and Brett are both happily married, so the chance of one of them coming out of the closet is slim to none. But what about someone else? You can’t tell me that there isn’t a single gay player in the NFL. Statistics speak for themselves. So does history.

Esera Tuaolo, author of Alone in the Trenches: My Life as a Gay Man in the NFL, came out after he retired. He played for one of the toughest, most “manly” teams in the league: the Green Bay Packers.

In his memoir, Tuaolo writes: “During my nine years in the NFL, I lived that close to the edge of destruction. My success tormented me.

The better I did, the more exposure I received. The more exposure, the greater the chance of someone discovering my secret. A secret that a man who plays the most macho of team sports is not supposed to have. The stress nearly killed me.”

“It’s rough down in the trenches, where linemen weighing more than three-hundred pounds hurl themselves at one another in brutal hand-to-hand combat, but it is nothing compared to the pain I kept buried inside so I could play out my dream. This is the story of how I dared to dream, not only of surviving professional football, but of living openly for who I am, a gay man.”

It’s sad to know that this man, who had achieved his dream of playing in the National Football League, was so unhappy because he couldn’t truly be himself. How many other players like Tuaolo are out there? How many of them go to practice day after day, praying that none of their teammates discover their true sexuality? And for what? All because of the “masculine” image that the NFL continually strives to maintain?

Yes, football is a tough sport. But who said that gay men aren’t tough? Obviously Tuaolo was tough enough.

There are plenty of straight men that aren’t talented or “tough” enough to make in the NFL. And when a player comes out, it helps to break down that stereotype.

Society has changed a bit since Tuaolo player for the Packers, and I hope that we are now at a place where a gay football player would be accepted. Imagine if this year’s Super Bowl featured a player who happened to be gay and open about his sexuality.

Would the announcers treat him any differently? Would the game be affected? Would other players focus on him rather than the game itself? Let’s say that player caught the winning touchdown pass…would his teammates shun him and refuse to celebrate?

I highly doubt it.

It would be just another Super Bowl—another day where two teams meet to battle it out on the field for the number one spot. Each team would work together for one overall goal. And the matter of sexuality would be an afterthought.

As former Green Bay Packers coach, Vince Lombardi once said, “People who work together will win, whether it be against complex football defenses, or the problems of modern society.”

Perhaps, it’s time we prove him right on the field as well as off the field.