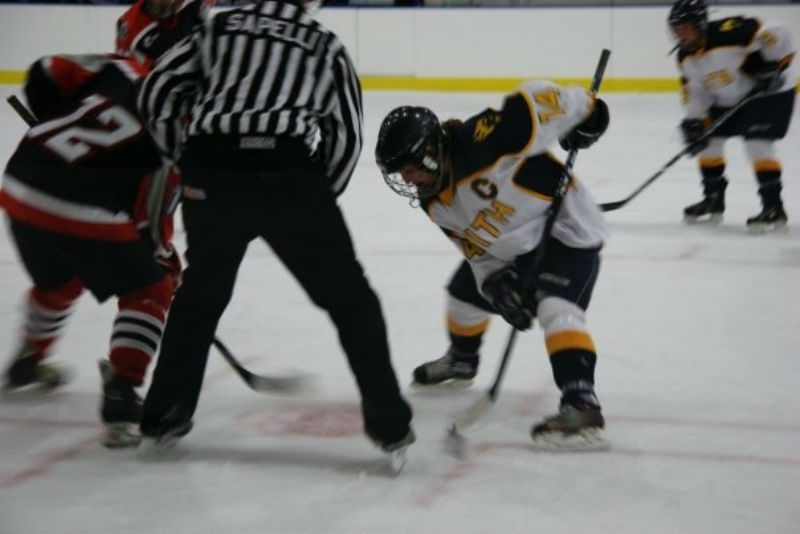 Nora Cothren shares what it was like being an out college athlete.

“We’re going to beat the shit out of you dykes tonight.”

That was the welcome I received upon gliding into the face off dot for an ice hockey game my junior year at Smith College. In many of my past team experiences, I would have cowered inside myself and lost all focus on the game.

But not this time. I was fully out now, playing on a team with teammates of all sexual orientations and gender identities. I was confident in myself, and in my skates. I was now able to take those words and use them as fuel.

We ended up winning that game, and I scored four goals.

It was a long journey to get to the incredible athletic environment I had at Smith—a journey filled with homophobic slurs, insults, and conversations in locker rooms, self-loathing, paranoia, and suicidal thoughts. Many people I talk to are confused about why I had so much trouble as a gay female athlete. Everyone assumes that women’s sports are a “lesbian paradise” where everyone is gay and there is no homophobia. That couldn’t be farther from the truth. Homophobia in women’s sports might not be as vocal as it is in men’s sports, but that doesn’t mean it isn’t there.

Homophobia is driven by sexism. Through this lens, gay men are seen as weak, soft, and submissive—all traits our society associates with women. Lesbians are seen as tough, butch, and strong—all traits our society associates with men. When gender roles are mixed up, it causes discomfort in the society, and this is often met with hatred. Many female athletes despise the stereotype placed on them of being butch, manly—and especially—gay. My teammates in high school would complain about there being a “man” on the other team, getting “hit on” by opposing players, and how everyone assumed they were gay because they played hockey. As a closeted teammate of theirs, none of this was said directly to or about me, but it hurt just as much. I was secretly perpetuating a stereotype they hated. So I assumed they would hate me.

This same fear still exists among female athletes and coaches to this day. Even with women like Brittney Griner and Megan Rapinoe playing and succeeding at a high level as out female athletes, we still only have one out Division I women’s basketball coach. The fear of losing recruits, or even their jobs, keeps many women trapped in glass closets. Those glass closets tell kids who look up to these coaches and athletes, that you can’t be open about who you are and succeed in sports. We need to start shattering those closets, but with the sexism and the homophobia it informs still in tact, we’re going to need to break through a lot of layers.

I say we start chipping away.