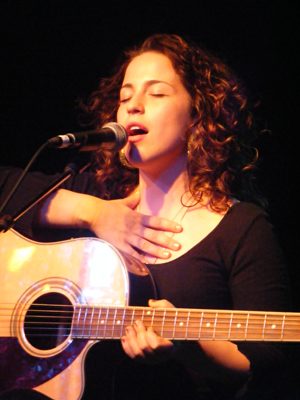 Ah, Melissa Etheridge and I. We’ve shared a love of cigarette smoke, a lead guitarist or two and now we’ll be sharing a divorce lawyer.

How’s that for randomly tying in some celeb hijinks with my own rock and roll drama? C’est vrai. I’ve been on hiatus for a bit, getting a new city, a new name and new behind-the-scenes dirt on a slew of emerging artists who have kept me entertained with their tales of debauchery and lovemaking.

Wow. Did I really write that? I did.

In the midst of all the mayhem, I’ve managed to stumble upon a few gems that will leave Curvettes breathless with excitement and hopefully prompt at least a few of you to throw down the suntan lotion, fold-up the beach chair and hit the neighborhood watering hole for the sweet sounds of summer indie rock. Umbrella drinks optional.

“I was a closeted singer when I was younger,” laughs the soulful Ashley Gold from Barbette in Uptown. “Then when I was about 20 or 21, I just picked up the guitar and was like, I want to do this. I want to learn how to play and sing in front of people.” Taking the stage with a small acoustic band, Gold belts out original tunes to a seriously packed house. My personal bubble is popped by a swaying, duo of dykes that can’t get enough of Gold’s smooth R&B vocal stylings that sound like a young Lauren Hill with the social consciousness of India Arie. Well, you know, minus the turban.

Gold stepped up her game earlier this year with a trip to SXSW, which is pretty much the Holy Grail for young rock chicks. She pushed her way through the throng of skinny jeans to make a few music connections and see the local sights. “The streets were littered with flyers and beer cans,” she laughs. “It was very overwhelming. We were just packed like sardines. I wasn’t prepared for it at all.”

I know the feeling as I am nearly jarred off my barstool by a giggling gaggle of girls that appear to be on Quaaludes. Gold waxes poetic on her early touring experiences while I clutch my drink nervously. “We were scared that there was going to be a blowout,” she explains of her first multi-state tour. “There’s got to be at least one blowout if we’re traveling across the country and back and playing shows.” This seems like a safe wager, but fortunately both she and the band arrive in one piece, none the worse for wear.

Between playing gigs and checking the  tire pressure, Gold is hard at work on a new EP that will be available soon. “Going to SXSW was huge,” she admits. “But Finishing the EP is the main goal now. That’s all I see.”

You can see Ashley Gold in her hometown of Minneapolis, Minnesota or on tour this summer. If you can’t wait that long, hit up her MySpacePage for streaming MP3s and videos. http://www.myspace.com/ashleygoldmusic