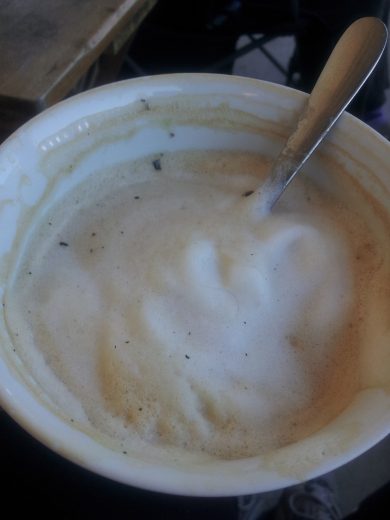 My mother tells me she was never tired until she was 35, that she had lots of energy and could go, go, go. And, considering she had two small businesses, two teenage daughters and my deadbeat dad split when she was thirty-five, would explain the shift. What I don’t get is how she wasn’t exhausted before. I’m thinking it was all that coffee.

I mean, the two biggest things that hit you after having kids is that you’re dumber than you thought you were (and will continue to degrade intellectually until your children are about 26), and you had tons of time and energy before having them.

Which is when adequate sleeps goes out the window, and caffeine comes in the door.

They should just write us a prescription for speed in the maternity unit or upon adopting, because we need something to drag our sorry asses through the day once those days become more demanding than we imagined possible, what with providing and parenting.

My wife, when our daughter was born and her brother was three, got a job in one of those companies famous for creating a work environment that encouraged their employees to compete for the honor of literally working themselves to death. The kind of company where the vending machines are lined up six-deep at midnight with employees buying Mountain Dew and Skittles.

I visited once and thought they should have Prozac machines in the hallway. Cubicle country. Zombified geeks with Nerf Guns beside their desks and six dirty coffee cups on the floor. People who never saw their families, if they had them.

My wife, naturally, wanted to have a life as well as succeed in a male-dominated industry that didn’t value them. So she’d come home, have dinner, play with the kids, and go back to work when I put them to bed. This is why lattes and Dr. Pepper were invented.

Luckily for the lifespan of the employees who survived the lay-offs in the high tech industry, the perceived value of spending every waking hour at work when the company considered them just a number come third-quarter cost-cutting, plummeted. Work-life balance became valuable since company loyalty was clearly not.

On the other hand, that was around the time when helicopter-parenting peaked, and mothers and fathers across the nation were spending any free time micromanaging homework, sports, and extracurricular activities for their kids. It seems that we like to be tired. And drop by 7-11 for Big Gulps or thirty-two-ounce cups of bad coffee.

It used to be that involved meant bringing homemade cupcakes to school (which you can’t do now without a food-handler’s license), going to monthly PTA meetings and sending the kids out to play until dinnertime and hoping they’d all come back, the little ones at the mercy of the big ones, the big ones teaching them the rules of survival, starting with “never snitch.”

Don’t get me wrong, I’m against Darwinian Parenting, free-roaming offspring and can micromanage if I must. I’m for intravenous Diet Coke.

I’d just like to see kids wait for adulthood for this vice. Parenthood (which I’d also like to see wait for adulthood) should come with a literal perk. With so many vices already available to young people (sex, drugs, drinking and overachieving themselves to death), the coffee should be for us. We earned it by surviving long enough to have them.

Blogger Bio: Beren deMotier is a Carol Brady in Levis/tattooed lesbian mama in a mini-van, obsessed with safety, doing the right thing and the amount of dog hair on her wood floors. She is a regular contributor to both Curve and Black Lamb, and has written for Hip Mama, And Baby, Pride Parenting, ehow.com, and for her blog, “That Lesbian Mom Next Door.” Her multi-award-winning book, The Brides of March: Memoir of a Same-Sex Marriage, recounts her giddy leap through a legal window, straight onto the barbeque pit of public debate when she and her partner married in Oregon in 2004, their three children along for the raucous ride. (berendemotier.com)