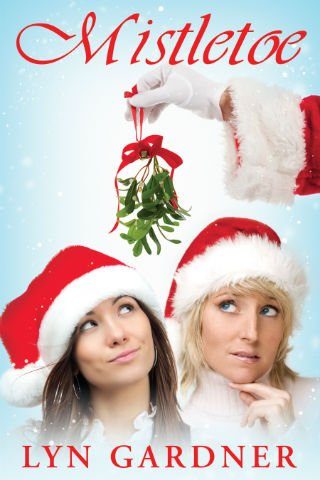 Lyn Gardner has created a beautiful story about the magic of Christmas, romance, and laughter, interweaving two women’s lives on the way to finding passion and true love.

Thirty years have passed, the letter is found, and now, Santa has a problem.  No child’s wish has ever gone unanswered, but that child isn’t a child anymore, Santa decides anyway that it still may be possible to grant Diana her wish even though there are only little girls and boys toys in the Toy workshop.

Percy, Santa’s Elf has had an idea, that with a little help, Diana may just get her wish.

Diana is attending three Christmas parties in the coming weeks.

Percy is sent to the Botanical workshop to bring back three sprigs of mistletoe, Percy will then attend, unseen, to the three parties that Diana will be going to and hopefully work a little magic, where under one of the mistletoes, Diana will get the wish she wrote for  as a child.

At the first party, Diana is not impressed with the who’s who of this business, finding them boring and pretentious.  That is, until she sees an elegantly dressed woman in a tailored suit, drinking wine and chatting with the bartender.  No man on her arm nor did she seem interested in the party, or the people there.

Intrigued by the woman, Diana asks who is she  and is told her name is Jamison Nash, the third partner in the firm which is holding this party, the first of three held every year, each one held at the different  partners homes.

Diana slips outside for a breath of fresh air as it is stifling inside.  A beautiful night, though cold, Diana shivers and is about to go inside when she feels a jacket being draped over her shoulders.  Turning around, it is the woman who was at the bar, extending her hand, and introducing herself as Jamie Nash.  Recovering her composure, she introduces herself as Diana Clarke.

There are two more Christmas functions for Diana to attend, and Percy has two more mistletoes to place.  Can a little girl’s Christmas wish from so long ago be fulfilled?

Lyn Gardner has created a beautiful story about the magic of Christmas, romance, and laughter, interweaving two women’s lives on the way to finding passion and true love.