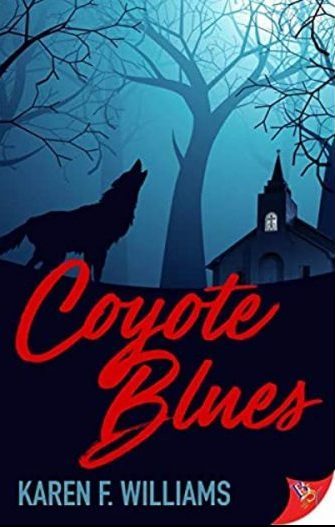 I’ve enjoyed a few shapeshifter lesfic books in the last few years, but this one is high up on my list of appreciation!

I do have to give a little content warning upfront: there is an element of the story that features domestic violence.

The main character of the tale is Riley Dawson, a psychotherapist with a lycanthropic affliction—she’s a werecoyote. She was found as a baby on the Appalachian trail and adopted by wealthy parents. She led a happy and privileged life until she fell in love with Fiona Bell, an evangelical preacher’s daughter. One night, after spending a romantic day with Fiona, her hormones, the full moon, and the overwhelming feelings she’s discovering for Fiona trigger her first transformation from human to werecoyote. She has no idea what’s happening to her and is terrified. Unfortunately for Riley, this is also the moment where she finds out the limits her parents have in their love for her—they witness her change and in their fear and disgust immediately send her off to college with a trust fund and an agreement never to return home.

Twenty years later, Riley is a qualified psychotherapist and runs a lucrative practice with her partner and mentor, Peggy. She, her wife Barbara, and her gay brother-in-law Tom are the only ones who know Riley’s secret. Riley’s never had a relationship since Fiona, limiting herself to the occasional online hookup to avoid exposure. But then one day, a family is referred for treatment to her practice and Fiona Bell comes back into her life…

I’ve reviewed a Williams book before and commented then on the quality of the writing—that same quality abounds in this book too. Riley is a complex and wonderful character, and I dare you not to fall in love with her. The supporting cast are delightful, Peggy and Barbara in particular. Fiona has led a troubled life since she last saw Riley, and some of the scenes she’s involved in are quite painful to read. However, they are essential to the narrative, which, as its main theme, deals with the idea of family and conformity.

Riley has been abandoned twice in her life, once by her birth parents, once by her adoptive parents. She’s found her chosen family, and would do anything to ensure nothing damages it. It’s what makes her so strong a character, and when she learns of Fiona’s troubles, you quickly realize she won’t stand for it. But it’s the way she deals with it that’s written so deliciously and contains a couple of fantastic twists that left me breathless with excitement.

In places the narrative does slow a little as the author takes great pains to explore the psychology of the various characters. To be honest, unless you are really interested in that subject, you can skim those parts and cut to the action and you won’t lose anything from the reading.

Other than that one small con, the rest of the book is all pros—great characterization, fantastic scene-setting, and an all-round wonderful story. Highly recommended!