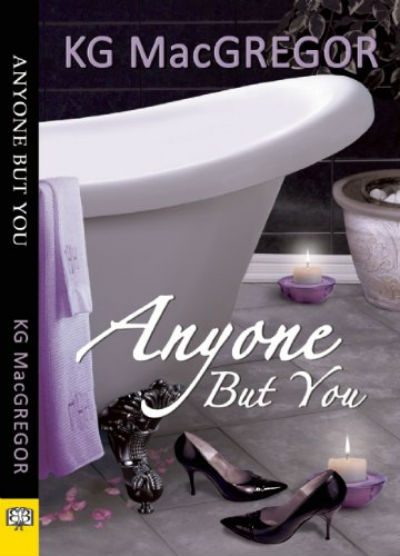 More than a sizzling romance, a well researched and well-written eco-thriller.

KG MacGregor always writes with flair and gets me hooked with her stories and characters.

This time she has in my opinion outdone herself. Her newest novel Anyone But You combines a romance and appealing characters with a timely story about ecological activists fighting a big corporation polluting and destroying willfully the environment. And despite the serious topic, KG MacGregor who holds a PhD in journalism manages to walk with ease the fine line between preaching (which she most assuredly does not) and laying out the facts and building a plot which inexorably leads the reader and the two main characters into the maze of corporate greed. Skillfully she keeps her readers on their collective toes until the very end of this eco-thriller come romance.

The first chapter sets the tone: The big brass of Nation’s Oil is waiting for Mr. Big Wig, their CEO, in the company jet – all but one are men, white men, white men with big hats. The oil business in all its clichéd glory, captured masterfully in a few sentences. They are all heading out to Minnesota where an underground pipeline has ruptured, spilling oily sludge into Minnesota’s pristine Lake Bunyan. In the middle of it: Corporate Communications Director Cathryn Mack, an old pro when it comes to spinning the facts in her company’s favor.

Thank goodness modern technology in form of an app called SappHere helps Cathryn to find a fellow lesbian in Duluth to alleviate her tedious stay in the backwoods. Stacie is smart, funny, sexy as hell, and wants a long-term relationship as much as Cathryn—which is to say, not at all. And when they meet the air sizzles … until they both discover that they both are – gasp – literally sleeping with the enemy. Because Stacie is head of the Clean Energy Action Network, in town to protest the greed and recklessness of oil companies and the havoc they wreak on the environment. So what will happen with Cathryn and Stacie and what the heck is really up with the oil-spill?

The story is incredibly well researched. KG MacGregor really “gets” the workings and manoevering of the corporate world and how the eco-warriors need to organize their response. The good ole boys in her story really know how to work the system and it is not easy, not even for someone working inside the corporate world like Cathryn, to really grasp that those jovial, powerful, well-mannered men might be up to levels of deceit which are difficult to imagine for the average person and the average employee. And this is exactly where I think the book is pure genius. Because that is exactly why corporations and the leaders of corporations succeed with their ploys: It is so hard to match those nice, well-spoken, power-exuding guys with their epic machinations and find as well as believe the facts to belie the spinned tales of innocence. But KG MacGregor would not be the master storyteller that she is if the political topic of her book were not subtly woven into the very fabric of the story.

I loved the way the story was written: fast-paced, with great punch lines, a tidy, well thought-out and thought-provoking plot, at times witty, at times dramatic. Dating the archenemy added zest to the romance and both heroines were very believable and easy to like. This is a book which had me bite my nails until the end, cheering for the good guys. Kudos to KG MacGregor for tackling such a complex theme and come out with flying colors.