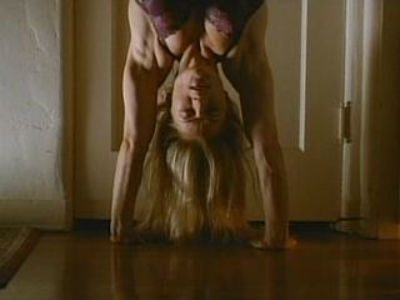 A change in perspective can change your life.

A movie with a truly wonderful message – one that empowers and inspires – is a rare gem. The Gymnast is one of those rare gems.

The Gymnast tells the story of Jane, a former gymnast. Her career ended after a tragic injury. Not one to be kept down, her daily rituals still include rigorous work outs, and a demanding job as a massage therapist. Hers is a regular, if not mundane, life working with interesting clients, having an overly-friendly neighbor, and living in a loveless marriage.

One day, she finds herself walking into a gym. Walking around and seeing all the young faces as they jump and flip and turn becomes too much for her. Jane leaves – or tries to. In her brief visit, she caught the eye of one of the coaches, Nicole. Nicole approaches her, asking if she’s afraid of heights. Jane decides to test the waters and see what kind of heights Nicole was referring to. She musters up her courage and goes to an unusual location where she meets up with Nicole, and Serena, a young, beautiful dancer.

Nicole has drafted Serena and Jane to join her and create an arial performance in the hopes of landing a show in Las Vegas. They are an interesting trio, and they all forge an incredible friendship. As they approach their deadline for the Vegas audition, Nicole is forced to drop her dream and tend to her son who was injured in a serious accident. Jane and Serena refuse to give up on their goal, despite pain and frustration. They struggle to create a new routine. They push themselves, and each other, in order to create an amazing performance piece. As they do so, a strong attraction forms between them. They both struggle with their feelings, fearing the intensity of it.

Eventually, the power of the attraction becomes too much to bear, and Jane cannot resist Serena any longer. Even after their first kiss, they struggle with their identities, their working relationship, and the draw to have more. We watch them battle themselves continually in order to make sense of it all.

Ups and downs, pressure from the upcoming audition performance, various friendships, and Jane’s wilting marriage all create a beautifully chaotic experience for the two women. The tension reaches its pinnacle when they challenge each other. Serena pushes Jane to end her marriage. Jane pushes Serena to finally come out to her parents. What follows is an emotional rollercoaster for the two.

The Gymnast has an incredible cast consisting of Dreya Weber as Jane. Addie Yungmee gives a powerful performance as Serena. David De Simone portrays Jane’s husband, David, and does an amazing job doing so.  Allison Mackie is Denise, a close friend of Jane’s. Mam Smith plays Nicole. Stef Tovar rounds out the main characters as Dan, Jane’s neighbor who cares too much for her.

This movie is simply wonderful. The relationships and emotions portrayed are perfect. This is not a fairy tale, this is humanity at its best and its worst. The complexities of it all are spot on. Moreover, the message this movie sends is one of empowerment and inspiration. Jane is in her early forties and she dares to branch out and try something new in aerial performance. Not only that, she dares to break free from her humdrum life to create a new life for herself. Throughout the film, we are shown that age is merely a number. That our age should not dictate what we do with ourselves physically or emotionally. It reminds that strength of character and being true to yourself is of the utmost importance.

The Gymnast is a story that pulls you in from the very beginning. From the amazing aerial work to the brutally honest emotions, this is one film you will thoroughly enjoy.