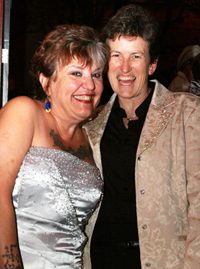 When Portland, Oregon’s Pauline Miriam found herself suddenly single after a 10-year relationship at 53 years old, she was baffled as to how to get back out in the dating scene.

“My options were really limited,” says Miriam, now 58. “There were some politically social organizations for older women but short of that, on a real social level, I couldn’t find anything to do.”

Miriam, being a long-time politico, did what came naturally to her. “When I don’t see anything that’s available, I go ahead and create it because I figure if I want to do it, there’s going to be other women who want to do it also,” she says. The result was speed dating, which garnered notable success from local women. Yet both Miriam and her cohorts had a yen for something different and a little less official.

Soon after, Hot Flash, a dance party officially for women 35 and older, was born and is currently heating up major cities such as Phoenix, San Diego and Seattle. Initially started with an $800 budget and a shocking attendance of 200 women, the dance party has become a busting and ever-growing monthly event. Due to demand, Hot Flash’s Seattle party rages twice a month and Miriam says she plans to expand the party to other areas. “Wherever we’re needed, we are ready to start sending Hot Flash everywhere now,” she says.

While the name Hot Flash may be a cunning play on words, Miriam says it is both a blessing and a burden. “The one thing that I love and hate that I did was to name it Hot Flash,” says Miriam. “It says it all. It says who we are. But I hate it because it doesn’t include everyone.”

Even though Hot Flash is geared towards a more mature crowd, Miriam says her main age group in attendance caps at 45. “What we say now is that we are for women who are too old for the 20-something club scene and too young to stop dancing,” says Miriam. ”We want everybody, the 20-somethings, anybody who loves the music that we play to come out.”

Miriam, who met her partner and accountant Joyce at a Hot Flash event, sees the event as not just a dating arena and says that older women tend to look for something more. “I don’t know what happens to us but all of a sudden, we change and we want to meet each other and we want to network,” says Miriam. “So Hot Flash becomes much more than a dance. It becomes a little mini revolution because people are networking their businesses through the dance, we’re networking socially through the dance, we’re creating a full and total community.”

Hot Flash may not be the hard-hitting club scene you experienced as a young pup, but it may make up for it in personality. “Hot Flash is friendly. That’s it,” says Miriam. “Everybody talks to each other. It’s known as one of the friendliest dances that you can go to in every city.” (hotflashdances.com)