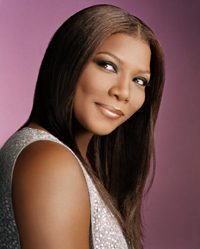 “She chilled for several hours, ordering bottle service for her friends and chatting up promoter Maggie Collier,” a spy for Page Six said.

The blogosphere lit up with rumors of Latifah’s Sapphic leanings in 2007 when MediaTakeOut.com broke the news that she was planning to officially come out as a lesbian and announce her engagement to her personal trainer, Jeanette Jenkins. This was after Page Six wrote about an unnamed celebrity who was planning to come out of the closet and announce an engagement…sound similar?

But as the rumors spread across the web, Latifah ducked and weaved, saying in an interview with Ebony magazine, “No comment on that at all. I’m done commenting on all that.”

The former rapper turned actress continued, saying, “It feels so invasive. It’s the one thing I don’t think people need to know about.”

For now we don’t have an official word on whether Latifah’s night of dancing at a lezzie bar means she’s one of us. However, should her story change, the talented and curvaceous star would no doubt be welcomed into our camp with open arms.