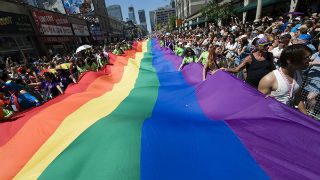 You are invited to share your Pride stories using the #MYWORLDPRIDE to be entered to win prizes including trips to Toronto’s WorldPride, happening June 20 – 29.

WorldPride 2014 Toronto launches the #MYWORLDPRIDE Project, inviting the LGBTTIQQ2SA* (LGBTQ) communities from around the world to share their stories of Pride, the movement and their celebrations.

Pride festivals across the world are local by nature, but each are connected to a much larger global movement focused on LGBTQ rights. WorldPride 2014 Toronto is providing an opportunity to link local movements simultaneously through the #MYWORLDPRIDE Project.

Using the hashtag #MYWORLDPRIDE, submit photos and videos encapsulating what Pride means to you, or images that capture your local Pride movement. Once a week from (May 27 – June 16) submissions will be curated by Pride Toronto.

Winners will receive one of seven trips (flight and accommodation packages for two provided by Pride Toronto’s partner, Tourism Toronto) to attend WorldPride in Toronto.

About WorldPride 2014 Toronto and Pride Toronto

Pride Toronto is the not-for-profit organization that hosts the city’s Pride Festival, an annual event in downtown Toronto during the last week of June and one of the premier arts and cultural festivals in Canada. It is also one of the largest Pride celebrations in the world with an estimated attendance of over one million people. It celebrates the history, courage, diversity and future of Toronto’s LGBTTIQQ2SA communities