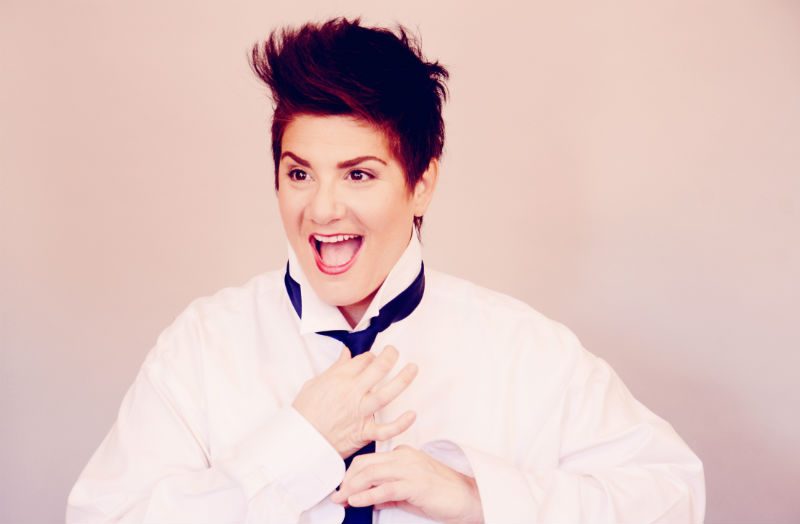 Amy Steinberg is not staying below the radar any longer.

Maybe you’ve seen her at a PRIDE festival?  Perhaps at a New Thought church or a hip coffee shop or café?

If not, get ready to be blown away. Amy Steinberg is not staying below the radar any longer.

Her album Broken Open will have you singing into the loofah, twirling your girl in a made-up tango and staring ponderously out the window.

Amy admits that though she has put out a lot of amazing music in the past, she had been content with staying low-key about it. But this album feels entirely different. She says she wants the whole entire world to hear the message of this album.

Was it her new girlfriend that kick-started her chance at stardom?

Who knows, but one thing is certain, Amy Steinberg has a message and a rhythm, which will forever alter one’s appreciation and perspective on love in music – and it’s just about to explode into the stratosphere. Simply put, she knows how to marry the sacred with the profane, enchantingly.

Nobody likes having their heart broken, though we’ve all experienced it at least one time, if not many times in our lives. The truth about heartbreak is that each loss leads one to find greater depth, more conviction of the heart and less ability to settle for what isn’t right for them.

There is a lot of music on the scene today singing to the tune of love and loss, though few address the real issues of heartbreak and personal empowerment in love the way Amy Steinberg, in her up-and-coming album Broken Open does.

There is a side to this whole love and romance scene that most artists either haven’t discovered yet or are unsure how to sing about. An element threads itself through every experience of love and that is what each particular relationship is saying about the Self.

Whether a person cares to admit it or not, every attempt at connection with another is really an opportunity to discover, more completely, the depths of the Self, which is often very spiritual and liberating. Unfortunately, few examples of how to move through this process gracefully exist to observe, much less sing along with.

Amy Steinberg brings new perspective into love and romance as she reminds listeners “I am One with Everything” and “When I’m Broken Open that’s when the Light comes through.” By inspiring her audience and empowering them with remedies for their sorrow, which transcend mainstream advice, Amy is in a genre all her own with this new album. If you ask me, it is a place too few artists sing from and so many are longing for during this particular stage of reality and planetary evolution.

Steinberg’s album began during a difficult breakup and completed itself in the presence of the newest love of her life, who is also an amazing woman like herself. Having played at many LGBT festivals, Amy is not new to the scene, but she is fresh where matters of the heart are concerned.

When asking about her new girlfriend Amy was not shy to say that love is love is love. She felt she always knew that to be true, but her absolutely crazy romance with her new love has confirmed the knowing that love is not confined to form or gender, it simply bleeds through where we allow ourselves to see it and receive it.

There is no doubt Steinberg is here to inspire, uplift, remind and align her fans with the truth beating in their own hearts and to sing to every side of love: the pain, the acceptance, the healing and the flight.