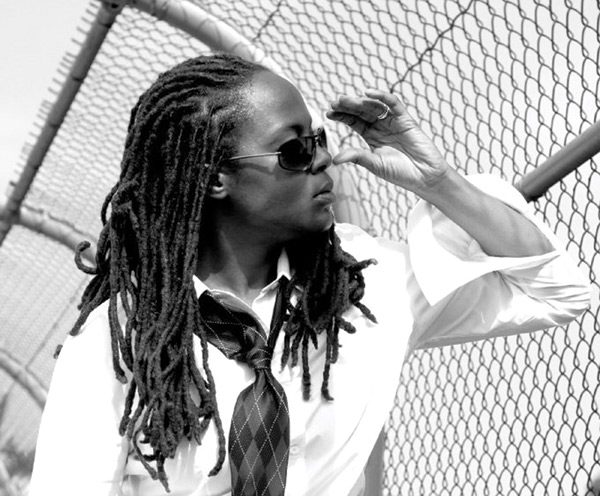 The out poet explores the sensual and the physical in ‘Swoon.’

Akinfe Fatou’s new poetry collection, Swoon, presents tangible physicality, organic sensuality, and multilayered intimacy intended to arouse and to empower. Swoon, the follow-up to her 2008 collection, Once as Lovers, moves away from that first book’s overt sexual preoccupation and toward a more complex idea of the sensuous.

But first and foremost, it is poetry about the body and everything that comes with it. “We are spiritual beings, but we’re in the physical,” Fatou says. “That’s how we relate, flesh to flesh, as opposed to that spiritual connection right off the bat.”

Swoon certainly puts readers in mind of the flesh: “I kiss the blood / And raise the flesh / You left behind / […] I tasted your skin,” reads “Square of 5th’s,” one of Fatou’s own favorites in the collection. Another of her favorites, “Evenings Like These,” presents a quieter but no less tangible vignette of physicality: “All the lovers / Nudging one another / […] Pretending to read / Each other’s palms.”

Even a poem as seemingly immaterial as “Languedoc” (entire poem: “Above all / I am just a woman / Wanting… / To share my world / With you”) contains a hidden link to sensual experience: The title refers to Fatou’s favorite wine, one you can almost taste on the tip of the tongue when you read the word aloud.

Fatou talks a lot about spirituality and emotional journeys, but Swoon’s language is grounded, overt, and above all tactile. “Touch is natural and healthy when given and received in a manner that honors the other person,” Fatou says. “It’s how we encounter the world.”

Whereas Fatou’s first collection of poems was largely about sex, with Swoon she wanted to encompass more than that. Bodies are sexual, sure, but when we associate bodies only with sex we create a barrier. “I’m always wanting to highlight our bodies, our minds, and our spirits. We shouldn’t be hiding or misrepresenting ourselves. People see the body and consider it taboo, but we’re better than that.”

The photograph on the cover of the book shows a naked woman’s midsection—her stomach, her hips, and the underside of her breasts, beaded with perspiration and caressed by light and shadow. No doubt about it, it’s hot, but Fatou reminds us that there’s more going on than that: The hips, the breasts, and the womb are all symbolic of life and of nurturing, and the nudity reflects what Fatou calls “genuineness,” but what we might also call earnestness and openness.

Fatou’s lines celebrate the body, but she doesn’t shy away from the fact that bodies aren’t always pretty. Fatou is a romantic, but she’s a clear-eyed, unflinching romantic, and even the ugly can become appealing in the light of her earnest appreciation.

While largely a personal reflection on people’s relationships, both with each other and with themselves, Swoon carries a certain political and social resonance, as Fatou considers herself a queer feminist artist. The poem’s statements on the body, particularly on women’s bodies, affirm the individual but push back against society.

“You see a lot of ads, and there’s a lot of music videos and rhetoric that paints the image of the body, especially for women, as almost like a tool or a toy,” Fatou says. “There’s a lot of disrespectful material objectifying it. We need to shift away from bodies being objectified.”

Not all of the poems in Swoon dwell on the anatomy. There are poems about purely emotional experiences, poems about urban life and landscapes, and above all poems about Fatou’s interest in the people around her.

Her declaration in “Languedoc” about wanting to share her world applies not just to friends and lovers but, seemingly, to the entire human race, and certainly to her readers. “I’m a loving person, period,” she says, and that openness and sincere affection ornaments her work.

Fatou grew up in Washington, D.C., and attended Howard University. On top of being a poet she’s also an activist, currently laboring on The Akinfe Fatou Project, a program to promote visibility for women of color in the arts, and a third collection of poetry is in the works as well.