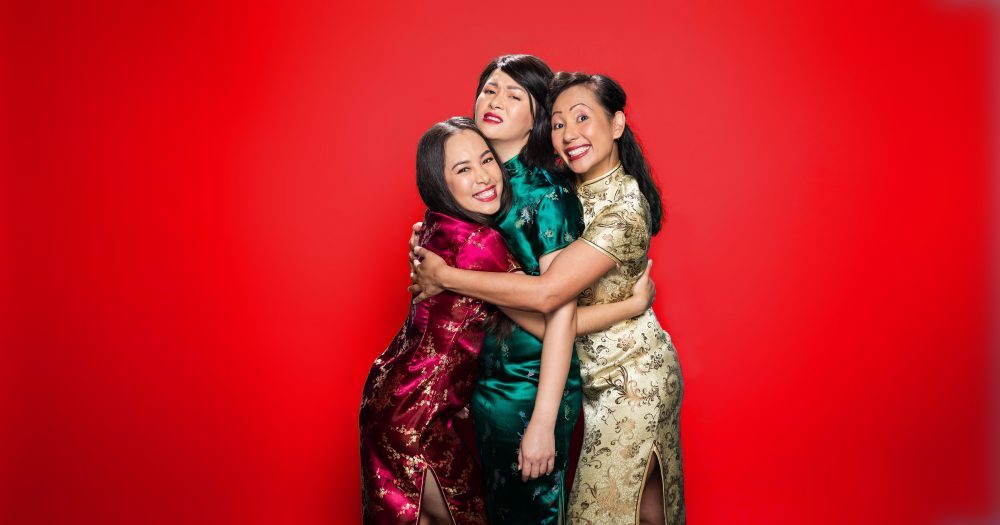 Single Asian Female is a show full of joy. It’s sassy, fierce, and very funny – Australian domesticity like you’ve never seen it before, fresh from a smash hit season at La Boite.

The Golden Phoenix, a restaurant on the Sunshine Coast. The last customers have left for the night, and Pearl can unwind. She’s the quintessential matriarch – balancing family, business, and her love of karaoke. Enter her daughters: Zoe, in the throes of online dating, making big life decisions. And Mei, a teenager, grappling with her identity in modern Australia. Of course they see the world differently to their mother. Pearl is the classic (hilarious) onslaught of embarrassing observations, constantly questioning her Westernised children. Tonight she reveals a secret that threatens to tear their family apart.

They told you to rub WHAT on your eyebrows? She gets away with saying the kind of sh*t that would land a lesser mate in friend purgatory and yet she’s held up in some kind of High Priestess worthy esteem that has everyone from the Spice Girls to Kanye singing her praises. And while we’re sure you can relate to touting her sometimes misinformed (yet deeply convincing) wisdom to a roomful of people in awe of your impressionable woes, we’ll bet you were never tricked into believing butter would improve your eyebrow game and having wet hair was a cardinal sin – unless you too grew up Asian?

Wash your pippy or it will grow worms.

When we were kids, Mum called vaginas ‘pippies’. She’d say this to my sisters and I to scare us into washing ourselves properly and to make us really put some elbow grease into it otherwise we’d, you guessed it, grow worms.

Filial piety in Asian families, and particularly Chinese families, is huge. If you’re younger, you can never speak back to your parents (even if you think they’re wrong) because duh, you’re young and therefore know nothing. I was also never allowed (and still not really allowed) to call my siblings by their first names because I’m the youngest. I have to use the appropriate monikers, like ‘Ga je’ (older sister) or ‘Goh go’ (older brother).

There are starving children in Africa.

My mum’s family struggled for some time; often she’d go without lunch at school because she couldn’t afford it. So, I was taught to never waste food: I had to eat every single grain of rice; if breakfast wasn’t finished, it was cling wrapped and eaten for lunch; if I couldn’t eat my fries in a Happy Meal, it went into the fridge and was microwaved later for a snack.

It’s a habit that I try to keep up, even today.

This was our mother’s solution to a boiling hot Brisbane night in the thick of summer.

We weren’t allowed to sleep with the fan on and we didn’t have air conditioning, so she just told us to lie still and the coolness would inevitably come. I can assure you it didn’t.

My Mum would storm into my room while my sister and I were mid fight and yell this at us. I mean, it worked strangely enough, because whatever we were fighting about wasn’t nearly as bad as our mum when she got angry. A very rare occurrence, but she could be truly frightening.

Is your hair wet?

We were never allowed to have wet hair. No matter the time, place or circumstance. It was sure to bring on a world of sickness and even now as an adult I still dry my hair as soon as I’ve finished swimming or had a shower.

Rub butter on your eyebrows and pinch your nose

My mother was quite hung up on beauty. When I was 3 I had an accident, and split my head open which left a big scar right across my eyebrow.

She believed if I rubbed butter on my scar every night it would allow the hair to grow back and make it look better because the “break” in my face was bad luck.

The ‘pinch your nose’ thing was to make my nose skinnier – more European – and have it look less ‘blobby like my Aunty Oi Ming who everyone used to call Aunty Oinking …. I looked most like her.

You are going in the sun? Where is your umbrella?

Again, a signifier of beauty was white skin. Also, the class system in Malaysia was: the darker the skin seemingly the poorer you were. So I’d want to sunbake on the beach with my friends to be cool, my tan is what I thought could pick up all the cute blonde surfer boys I was always in love with and she’d always be walking in long sleeves, hat and umbrella in the boiling hot summer.

No, it doesn’t have a pattern.

I remember wanting a plain black t-shirt and black bike pants.  Mum thought it wasn’t value for money because there wasn’t a bright coloured pattern or print on it.

If she was alive today she would be decked out head to toe in Gorman!