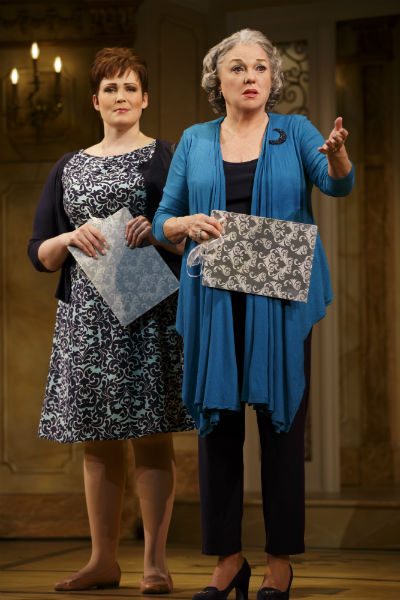 A Broadway marriage musical with a gay twist.

It’s unlikely that you’ll leave It Shoulda Been You humming happily—Brian Hargrove’s tunes are really not that memorable. But you will leave with a smile on your face.

This feel-good musical comedy directed by David Hyde Pierce (Frasier), and starring Broadway legend and Tony winner Tyne Daly, presents fun family antics tame enough even for grandma. And audiences who have had any involvement with a big family wedding, or who have Jewish heritage will find much to laugh at as two tense and dysfunctional families prepare for a mixed marriage neither side is completely thrilled about.

Daly, who plays the bossy Jewish matriarch, is fabulous, and while it’s true that she’s capable of far more substantial thespian turns, she is nevertheless a delight to watch and definitely steals the show.

Her nuanced number in the bridal party’s beauty parlor scene, pondering the benefits of being “nice” (i.e. two-faced) to her WASP nemesis (Harriet Harris)—mother of her future son-in-law (David Burtka)—is one of the highlights of the show.

This is old-school entertainment, and—as is often the case with weddings themselves—some of the conventions feel a little dated. While the plot complications are somewhat implausibly, if energetically, resolved, It Shoulda Been You moves at a lively pace and comes with some pleasant surprises: a lovely performance by Lisa Howard, who plays the plus-size sister of the impossibly thin and gorgeous (but not-so-perfect bride); plus a contemporary twist that has special appeal for lesbians and gay men.

“I didn’t see that coming,” one spectator was heard to say on opening night.