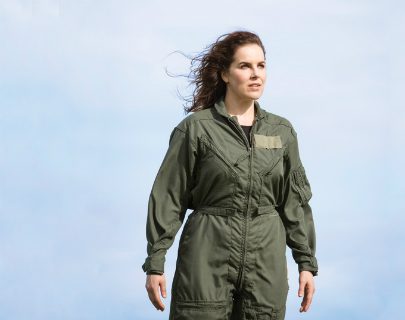 Grounded is set to be one of the hottest plays of 2014 – it's been critically acclaimed by the Guardian and received the Fringe First Award at the Edinburgh Festival. Grounded is a powerful story about a a F16 fighter pilot, a veritable rock star of the skies who falls pregnant. It not only depicts the challenges faced by modern women, but also the complexities of modern warfare and the deeper internal turmoil that can arise.

1. Why is Grounded such an important play for people to see?

The story of this new warfare, weaponized drones, is only just starting to be explored. The prevalence of drones is only getting bigger, and will in some way effect us all, whether it be through their surveillance, or in other darker ways. And the moral injury being inflicted on those who have to carry out the carnage of this new war has not been talked about yet in popular culture.

2. What was it about the play that particularly appealed to you as an actress and a woman?

The extreme complexity of the character was enthralling. Her chutzpah, humour and fallibility. The story is so full and rich and is of our times. The language the writer uses is magical. And I’ve always been drawn to stories of the effects of war on those who have to push the buttons and pull the triggers.

3. The play grapples with many of the tensions that women face in the modern world, such as the often time‐conflicting expectations of career and motherhood. In your experience, how have these attitudes changed and where do you see societal expectations heading?

If I look at those around me, my small circle of friends who do have children and are juggling that responsibility with career, it doesn’t look easy. And those are the people with partners. It seems to me that the expectations to do and have it all are just as prevalent as they have ever been.

4. How do you prepare for a one‐woman show? Were you able to draw from personal experiences in order to relate to your character?

The director Kirsten von Bibra, the stage manager Jillian Britton and I spent a month doing script analysis before getting to the work on the floor. I’m not thinking about the solo aspect. I’m just trying to figureout how to tell the story. It’s a big beautiful beast of a thing. And yes I do draw from personal experience as well as imagination. Can’t tell you which bits though. Secret actor business.

5. As a founding member of Red Stitch, you have seen the company develop local and international productions from around the world. Where do you see the theatre going in the future?

We hope to continue growing our Red Stitch Writers program. It just takes time and money to develop great work. More collaborations with other wonderful companies and artist, more tours around the country and hopefully overseas one day, and more brilliant premieres of plays from around the globe.