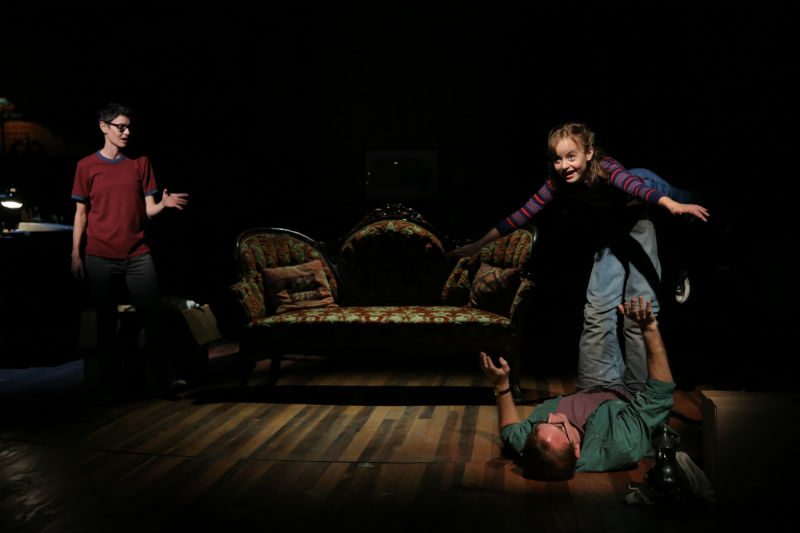 Fun Home, The Visit, The Heidi Chronicles and Five Times in One Night

It seems that freeing yourself from the shadows of family history is a tricky proposition. I’ll admit, I’m a self-help junkie and have tried most methods, mantras or manuals for self-improvement and have yet to understand how to do it.

In Fun Home the audience experiences the captivating Beth Malone, who plays the 43-year-old Alison Bechdel, wrestle with the task. The musical is staged in the round at Circle in the Square Theater and you feel like you’re right there with her as she uncovers her past. It’s a deep journey with many delightful moments including college-aged Medium Alison (Emily Skeggs) singing to the rooftops about her first sexual experience with a woman in “I’m Changing My Major” and Small Alison (wonder-child Sydney Lucas) dancing and singing in a 70’s-style commercial in “Come to the Fun Home!”

Alison’s family is extremely flawed and she’s still bears the scars from her perfectionist, closeted father (Michael Cerveris) and her resentment-filled mother (Judy Kuhn). Her parents were eerily familiar. Sure, their story is particular with Bruce having affairs with men for years, sometimes with underage boys, but the dissonance between them was so specific that it was universal.

How do you love people who have hurt you so much? Medium Alison and Small Alison  display the memories that you’d love to forget but can’t keep your mind from wandering into. These two charming actors dive back into the heart of the situation so older Alison can figure out pieces to her puzzle. Most people won’t voluntarily dig as far into family trauma as Alison Bechdel did to write the graphic novel on which the musical was based or as Lisa Kron and Jeanine Tesori did to craft the show, so it’s natural that by watching Fun Home you’ll start to unravel some of those questions for yourself.

The Power of Chita in The Visit

When Chita Rivera walks onto the stage the entire audience sits at attention. Her presence moves from the theater and extends into the lobby and out onto Broadway. In The Visit Chita brought her luminous charisma and skill in the guise of Claire Zachanassian, a billionaire who visits the town that once banished her for becoming pregnant out of wedlock. She returns for revenge with an indecent proposal: Murder Anton Shell, my old lover, and I will give the town one billion plus one million for every citizen. The townspeople initially declare their higher morality, but as Claire smartly retorts, “I’ll wait.”

To complicate matters, as soon as the old lovers set eyes on one another it’s clear that they still love each other. Claire and Anton spend a lot of time bemoaning their lost youth, which is emphasized by the younger selves (John Riddle and Michelle Veintimilla). Watching these iconic performers on stage, I didn’t agree that they lost anything with their advancing age; it is one part of The Visit that could never ring true. Chita might not be able to move the way she used to, but her simplest movements have enormous power and the sheer force of her craft is astounding. Chita glows and is simply more beautiful in her older self.

Considering Feminism in The Heidi Chronicles

At the end of The Heidi Chronicles — recently mounted and sadly shortly thereafter closed — Heidi, played by Elizabeth Moss wishes for her baby daughter to be part of a generation of women who find happiness. The Wendy Wasserstein play follows Heidi through her thwarted search for the same. Was the limited attendance to this marvelous production, with excellent direction by Wendy Wasserstein and solid performances, caused by societal unease with feminism or is the fight so frustrating we wouldn’t chose to watch it onstage as we’re already dealing with it every day?

Heidi came of age in the 60s and 70s, a time when feminism was changing the way women thought of their lives. She found it a struggle to be a smart, driven women and to find happiness in a world that, like Scoop (Jason Biggs) her on-again/off-agin lover, only welcomes that independence some of the time. That is still the issue for smart driven women today. Scoop — in Sex and the City speak, Heidi’s “Big” —  admitted that he couldn’t marry her because he wanted a wife who would sacrifice her life to take care of the family while he focuses on his career and mistresses. Although the dating landscape for heterosexuals has shifted, that type of thinking still exists. I mean, who doesn’t have a smart and successful hetereosexual female friend who bemoans the lack of interest from and choices among cis-men?

The play smartly deals with the changes in feminism through the decades, further emphasized by John Lee Beatty’s spot-on sets. One of the scenes features a body-loving, consciousness raising feminist group in the ‘60s to which Heidi’s friend Susan (Ali Ahn) brings her. Susan later uses her professional degrees to help a women’s collective in the ‘70s, but then makes her way to the become a television executive in Los Angeles in the ‘80s. Heidi visits her there and they “lunch,” along with Becky (Elise Kibler), Susan’s young assistant. Becky noticeably asks for coffee instead of a meal and Susan promptly drops her breadstick, then finds a way to cancel her order. Enter the 1980s and ultra-perfectionist and body-hating culture that still persists!

During the women’s collective scene there was an apparent sense of responsibility by the women to help other women. It felt like a dream, since I really don’t really see this spirit in the contemporary world (please, prove me wrong!). The fact that Heidi can remain friendly with Scoop’s wife is notable. The 2015 version of the pampered heterosexual wife (one of The Real Housewives New York City) would have ripped Heidi’s hair out for merely existing.

Heidi is put to task when Susan and Becky ask her to become an advisor for a television sitcom that would highlight the mistakes that independent women made in creating their lives. Heidi was stunned and tells them that she doesn’t feel like she made mistakes. At the end of the play, feeling shut out from the ideals by which she built her life, Heidi finds her peace by solidifying her friendship with friend Peter (Bryce Pinkham) and settling into life with an adopted daughter. It’s a real ending, not the fairy tale that we imagine when one is told they can “have it all.”

They Did it Five Times in One Night

It’s no surprise that playwright Chiara Atik is the author of the book Modern Dating: A Field Guide, as her play 5 Times in One Night at Ensemble Studio Theater’s YoungBloods considers the dynamics of modern dating. Two actors, Darcy Fowler and Dylan Dawson, deftly play five different couples in unique situations: post-apocalypse, about to have an abortion in the 2010’s, communicating mostly by letters in the eleventh century, sexually-frustrated in a contemporary relationship and curious in the Garden of Eden. Throughout all of these pieces it’s apparent: The need to be wanted and loved has endured throughout time and it at the heart of most couple drama.