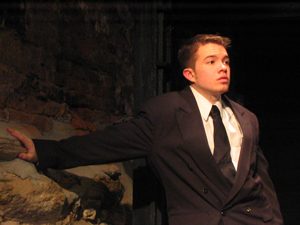 Performance artist Kestryl Cael is bringing gender to the forefront of the theater world in XY(T), which explores issues of identity and masculinity.

What is the transgender narrative presence in the theater community?

I don’t think there is a single transgender narrative presence, in the theater community or anywhere else—there are many different transgender narratives and many different people telling them. Perhaps the stories are becoming more visible, or they are being noticed more by the mainstream, but I think that trans stories in theater—especially when they are written or performed by trans artists—refuse to cohere into a single narrative.

What is your purpose as a performer in the queer community?

XY(T) primarily explores gender—can you share some of your early impressions of gender as a young child or early teen?

XY(T) devotes a lot of attention to gender, but it doesn’t really  reflect on my own gender as a youth—when, honestly, I didn’t really  see what all the fuss was about. My youthful gender expression was all over the map, still is, to an extent.

At the age of five I conspired to get a short haircut, courtesy of one of my brother’s remote control cars. My birthday the next year was themed The Little Mermaid. I spent a fair amount of time running around empty lots in my desert neighborhood, chasing lizards and crickets.

At age 12, I discovered punk rock and feminism and joined into what would be the tail end of riotgrrrl, complete with short skirts and tall boots. At age 17, I discovered queer theory, and from there the pieces came together. In retrospect, I had a lot of fun performing a range of genders as a kid, though I can say with some assurance that I never conceptualized of it as such at the time.

How do you use your performance to shape and form the audience’s perception of gender?

I don’t see the audience as passive recipients of my performance…instead, I envision XY(T) as a provocation for audiences to  think critically about gender in ways that they possibly haven’t  before, which takes different forms depending on the audience. I’ve had middle-aged straight women love the show, to the point that they come to see it multiple times.

They get very different things from it than the gender studies students or the queer folks, but my goal is for everyone to leave the theater with a few more questions about things that perhaps they hadn’t ever challenged before.

How do you want your audience to perceive you in terms of gender?

There isn’t really a visual presentation that exactly lines up with how I see my gender, so it varies based on the performance. In XY(T), I aim in a mostly masculine direction, which is apparently effective to such an extent that I once had an audience member who did not realize that the piece was partially autobiographical—he assumed  that I was some male actor, who just happened to be performing a piece about butch and trans masculinity.

The piece is monstrously unique, and at this point, it’s something of a performance heirloom for XY(T), complete with black skid marks from sliding across far too many theater floors. I honestly don’t know what I’ll do if I ever have to replace it.

In your bio you state that when you’re “forced to choose a label” you identify as a transgender butch. What is your perception of labels?

I find labels to be helpful as an organizing tool, but dangerous when they are used as an excuse to limit, exclude or constrain. People are threatened when someone that they perceive as different from themselves uses the same label to self-identify—I’ve been told that I can’t be butch because I take testosterone and I can’t be transgender because I don’t identify as male. I use labels as points of community alignment, but shy away from them to the extent that they become tools of limitation, restriction and control.

What is your personal perception regarding transition, is one always in transition or is there a beginning and an end?

Life is a series of transitions, none of which ever fully end. This applies whether you are changing your gender, or your age, or your hair cut or your opinion. I don’t think that it’s possible to get out of transition. The body goes through some pretty interesting transitions after you stop living in it, after all.

You’re working on a new piece entitled 348 about your forced attendance of a “therapeutic boarding school,” tell me more about that.

Forced attendance puts it mildly—I hardly went outside for seven months. My parents placed me in a private lock-down institution for reasons which are still unclear to me [as] pesky things like diagnoses are not required by these programs.

348 excavates my own experience as a component of a deeper examination of forced institutionalization, time, power, madness and self. I envision the piece as both a public alert to the existence of institutions such as the one where I was imprisoned, as well as an opportunity for confrontation, critique and catharsis.