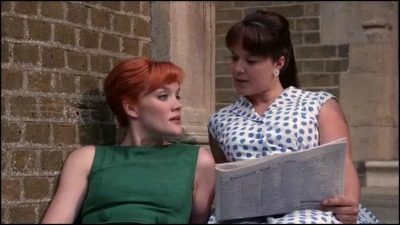 Will it be a happily ever after for the couple as Delia recovers from her bout of amnesia?

Let’s be honest, none of us were feeling very optimistic when paramedic Delia Busby cycled to her demise back in March, forgetting she was a lesbian as her head hit the pavement. After all, we’d become so accustomed to unhappy endings for lesbians on TV that we simply assumed her budding romance with nurse Patsy Mount (Emerald Fennell) was no more.

We whined and whined, berating the fact that writer Heidi Thomas didn’t quite know what to do with the couple, offing the show’s only same-sex couple without the actual blood on her hands that comes when you kill off your lesbians. Here’s looking at you, Sally Wainwright.

So it’s with humble pie (and a big sorry to Heidi) that we received the rather exciting news that Delia, played by Kate Lamb, is making a speedy recovery and her memories of lady love are flooding back just in time for the new series, which is back on our screens later this month.

Of course, we had an idea it was coming following the glorious Christmas special last month which saw an emotional reunion between the couple, but we didn’t dare dream that they’d be back for good.

On what’s in store in the series ahead, Welsh actress Kate says: “The series moves into the swinging 60s and begins to explore women taking ownership of their lives, their bodies, their occupations and Delia and Patsy are finding their place in all that.

“Hopefully [Delia] and Patsy will find more opportunities to be together and grow closer. Maybe begin to settle into their relationship rather than steal moments here and there.”