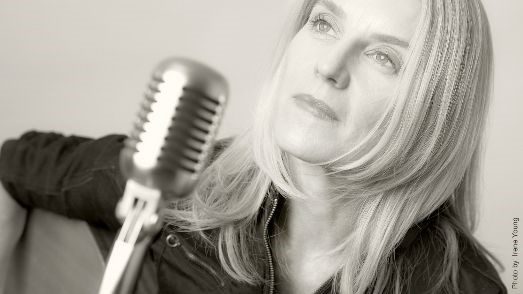 Rachel Garlin’s release Mondegreens  plays like a love letter to today’s uncertain times, each song evoking a blend of heartache and hope, social reflection and self-discovery.

With no shortage of touch points to our current state of “shelter-in-place” living (sometimes uncannily so), Garlin’s LP includes “Out There,” an evocative story-song about a little girl who’s forced to stay inside. Garlin penned the song for the eponymous virtual-reality musical that premiered in Paris last October and that features the voice of Grammy-nominated singer Vanessa Williams.

Garlin’s acoustic version paints a poignant picture of a child’s loneliness during a period of confinement at home, and the eventual return to freedom.

At the center of Mondegreens are Garlin’s nuanced lyrics—image-rich and literary, subtle and surprising—making each song its own snow-globe story that stirs and settles. With nine originals, plus a not-to-be-missed cover of Don Henley’s anthem “Boys of Summer,” Mondegreens showcases producer Julie Wolf’s talent for working with singer-songwriters. Aiming to truly discern the needs of each song before adding instrumentation, Wolf deftly produced Mondegreens in a way that intensifies, without overdoing, the depths of meaning in Garlin’s very visual storytelling.

Which brings us to the question: What do you do when you come across a listing for a free photobooth, a handmade version of the kind they had at old-fashioned fairs? If you’re a songwriter like Garlin, you likely salvage the thing, set it up in your garage, and add it to a collection of found treasures displayed to walkers-by on your streetcar-lined sidewalk in San Francisco. You chat with neighbors and strangers, and jam alongside your wife and young kids—improvising lyrics and melodies while finger-picking on an old Gibson J-50 guitar. You’re a visual composer, with a strong dose of color synesthesia, so your songs are pictures; they range from concise musical snapshots to long-developed portraits with details only the darkroom of a poet’s heart can reveal.

Inspired by the photobooth, album opener “Capture Me” explores a dance that every long-term relationship performs. “There’s this push-pull character, a person who holds on and let’s go,” Garlin says. “I’m interested in that tension.” Album highlight “Good Morning” is a notable vocal performance, articulate without losing delicacy, playful and profound. The song was spurred by a friend’s 30-year tradition of family members pulling out silverware to form a birthday message to the celebrant on the dining room table.

Garlin loved the idea of everyday tools creating something special, and the never-ending beginnings and endings that define family life. “There’s no end product in these relationships—in families. There’s just the process.

There’s just the mornings and the evenings. That’s everything.”