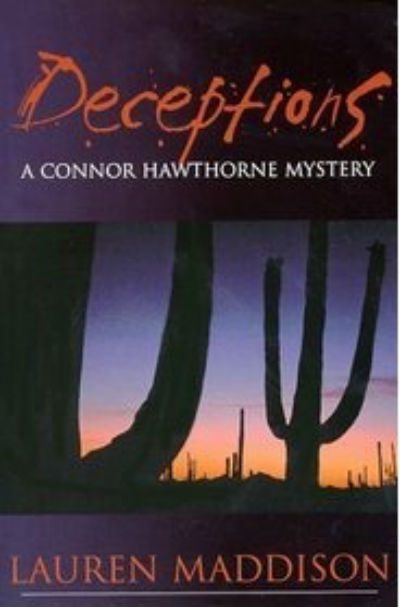 The market abounds with paranormal and urban fantasy, which usually means vampires, werewolves, and the occasional fae. Good stuff! But rare are the books that feature witches and Celtic magic. Rarer stillare books that incorporate Native American traditions. Many years ago I accidentally came across the Connor Hawthorne Mystery series by Lauren Maddison in which these particular strands of paranormal are skillfully enfolded into the story. Then published by Alyson Books,the series never went “mainstream” in the lesbian book market, although it found many delighted readers. Recently, I discovered the series is now available in e-book format. That’s reason enough to introduce Deceptions, first book in the Connor Hawthorne Mystery series, to a wider audience.

Devastated by the death of her longtime lover, Connor Hawthorne, lesbian, best-selling mystery novelist, former district attorney, and daughter of a former US senator and presidential adviser, needs to put the experience behind her and rebuild her life. But someone is determined to make sure she doesn’t. While at a writer’s conference in the Southwest, Connor finds herself running for her life across the high desert, aided by a beautiful and resourceful Navajo guide, Laura Nez. As the murderer draws close, Connor and her guide must unravel a web of treachery, some of which lies in Connor’s own past, to save their lives and prevent the discovery of a powerful secret that someone is willing to kill for, again and again. In the process, Connor will encounter the very special gifts of wisdom of Celtic and Native American traditions.

This is an exceptionally well-written book and I loved the enticing quotes of poems at the start of each chapter. The prose is fluent, well-edited, and a joy to read. The story is intricate and rich, a mix of mystery and thriller with magic woven into it. I quickly came to love the main characters, Connor, Laura Nez, and the steadfast Malcolm. The magical element is introduced gradually and skillfully with a grand finale at the end. The better part of the story is set in Navajo country with a Navajo guide. The exploration of the Navajo Southwest pays homage to the style of Tony Hillerman, the grand master of Southwestern Navajo stories.

If you want to give this great, mystical mystery a try, Deceptions is a steal on Amazon for only 99 cents. And once you are hooked, there is more to explore. There are, all in all, five books in the series and the Celtic tradition and England play a major role in the subsequent books.