Ria Mae Is On the Rise

Ria Mae Is On the Rise

The Canadian pop star recently released the EP My Love, which serves as a follow up to her successful self-titled debut record featuring the Gold-certified single “Ooh Love” and platinum-selling “Clothes Off.”

Mae seems incapable of writing a bad song. With roots in pop and an endless passion for writing music, Mae’s My Love acts as gasoline on the fire of her slow-burn success.

Featuring the single “Bend” which is an electro-pop anthem for resilient hearts, and the Tegan Quin collaboration “Broken,” this album is a must-have for 2018.

It’s already become a staple in our household, finding its way onto workout mixes and commuter karaoke sessions with Janelle belting out “You can try and bend my heart but it won’t break…” at all hours of the day.

And don’t even us get us started on the “Ooh Love Neon Dreams Remix.”

If you need some ear candy for the gym, this is it.

You can stream or purchase My Love here:

Check out the video for “Bend” below.

Making Her Own Way

Rachael Cantu’s “Make Our Own Way” (off her Little Brutes EP) was the theme song for the NBC sitcom “One Big Happy” back in 2015.

Ellen DeGeneres produced the Elisha Cuthbert starrer about a lesbian who is pregnant with her best friend’s baby while he is in a relationship with another woman.

Though the sitcom is no more, the theme song has stayed on many of our personal playlists with its undeniably catchy hook and warm weather vibe.

Lucky for us, Cantu has released the title single off her upcoming album Love Rush (to be released April 13). The track is a lush foray into more pop territory than her past work. “Love Rush” captures the essence of love and the exhilarating rush that comes with finding ‘the one.’ You should play this song for your sweetheart.

You can stream Love Rush here

A Shot Of Brandi

Grammy-nominated Brandi Carlile is an absolute icon. Her upcoming release By the Way, I Forgive You is due out February 16, produced by Dave Cobb and Shooter Jennings.

The album’s first single “The Joke” has already received critical acclaim and the band is gearing up for an extensive tour in support of the new album. “The Mother” is the second single released off By the Way, I Forgive You.

The song manages to capture all that it means to be a mother, the ups and downs and the absolutes in one emotional track.

Both “The Joke” and “The Mother” are available for immediate download when you pre-order the album here.

Watch the video for “The Mother” below. You may want to grab some tissues. 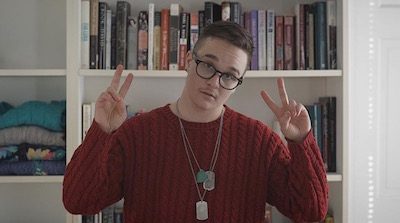 Uncle Meg (aka Max Skaff) is a Brooklyn based transgender rapper whose new release Can’t Stay the Same debuted back in December.

Can’t Stay the Same is a follow up to 2016’s Bug and the ten-track album is a collaboration with MC John Debt.

The pair finished the songs for the album in early 2017, right before Max’s surgery and John moving to Berlin.

The collection of songs ended up being a reflection of those big changes, and for Max, his transition and starting to navigate the world in a new way.

Can’t Stay the Same is introspective without being maudlin, and sounds like a night out with similarly minded friends.

Rap and experimental fans will definitely dig Can’t Stay the Same , the album  is available  here.

Having toured the country for years as the lead singer of Sick of Sarah, Abisha Uhl is used to being in the spotlight.

After Sick of Sarah disbanded, she remained front and center continuing to tour and write music with a new group of musicians.

Since recently wrapping up the Better Where You Are tour, Uhl has been playing one-offs (some recent shows have even included original SOS member Brooke Svanes on drums), and getting ready to release her new EP Better featuring the single by the same name.

The video for “Better” is a fun nod to iconic romance films with a twist. Starring Uhl and actress Lauren Virginia Albert, the pair recreates famous scenes with an eye towards smashing the patriarchy and changing up gender norms.

Fun fact: We met while Janelle was tour managing Sick of Sarah and Melany was covering the band for Curve.

In many ways, we are better for having known Abisha and the girls of Sick of Sarah.

Check out the video for “Better” below.