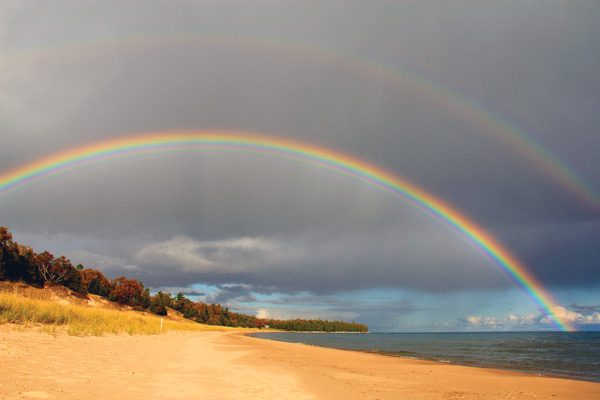 Gay-friendly doors are starting to open in Wisconsin.

The waves on Lake Michigan were too choppy, so our boat tour was cancelled. Secretly, I was glad. The mid-October wind was battering me, despite all my layers, and this wasn’t the last time I’d regret not bringing my winter coat. I took refuge from the blustery day in the Bayside Tavern in Fish Creek and sat down at the bar next to Kenny, a balding, muscular guy in his 50s who’d come all the way from Missouri to go fishing, but whose day trip had also been cancelled. Under a mounted walleye, and over a couple of local Billy’s Bayside brews, Kenny and I got acquainted. Shortly after I outed myself, the questions started, as I figured they would, and for the next hour or so, I answered every question Kenny had about lesbian life, including, of course, the requisite “I know this gal, and she’s so pretty, she could have anyone. I just don’t understand why she wants to be with someone who looks and acts like a man.” I launched into Butch/Femme 101. Then I struggled to answer why a self-identified lesbian friend admitted she was attracted to him. “Because you’re a good looking guy and she was drunk.” Just a guess.

The advice columnist in me enjoyed every minute of this conversation. Actually, it wasn’t just Kenny—everyone else I met in Door County was pretty gay-friendly. It’s just that there weren’t very many gays around. In fact, in four days I saw only one other lesbian. The visitor’s bureau is working hard to remedy that, reaching out and advertising to the LGBT community.

Regardless, the Door County peninsula is a great place to vacation if, like me, you love outdoor activities. In the upper reaches of the Midwest, nestled between two bodies of water, Lake Michigan and Green Bay, the whole peninsula is a playground for the residents of Chicago, Minneapolis and Madison. Although the area is lovely in the fall, when the leaves start changing like they do in New England, and there are wine and cider tastings, and plenty of places to go biking and hiking, I couldn’t help but wonder, as I pulled my hood up and dug my hands into my pockets, what it’s like in the heart of the summer, when swimming, kayaking and boating are the main activities.

Too cold to swim, I signed up for a Segway tour in the town of Sturgeon Bay. I’d never been on one of those battery-powered people movers and thought it would be a fun thing to try, but even with borrowed gloves and bundled up in every piece of polar fleece I own, I was shaking so hard by the end of the 90-minute tour that I could barely concentrate on maneuvering the Segway down sidewalks and over curbs. I just didn’t account for the wind chill when I packed for this trip.

When the winds died down, I rented a bicycle for an easy 10-mile ride through Peninsula State Park, where nuthatches climbed up and down the pine trees, blue jays squawked from birch to birch, and chickadees chirped in the muddled sunlight. After warming up with wood-fired gluten-free pizza at Wild Tomato back in Fish Creek, I drove over to Whitefish Dunes State Park for a hike. The highlight was stepping out from the trail and seeing an amazing double rainbow over a deserted beach that would have been packed with bathers in the summer.

Whenever I travel, I like to taste the local fare. And since this is Wisconsin, there’s cheese at every meal. Because Door County is the fourth-largest producer of cherries in the nation, there’s also cherry pie at every meal. You can opt for pie and deep-fried cheese curds at any number of restaurants, but I preferred the artisan cheeses at Wisconsin Cheese Masters—paired with cherry wine from Harbor Ridge Winery followed by chocolate covered cherries. There are plenty of places to eat a fancy meal, but other than dining at gay-owned Trio, a French bistro, I’d recommend sticking to casual local fare.

The big food event in Door County, though, has to be the fish boil. Fish boils are more of a cultural event than a foodie attraction. Started as an economical way to feed large groups of people, the boil is a Door County tradition. Crowds gather outside, around a bonfire, as a cook loads potatoes, onions and mild Michigan whitefish into a big pot, which boils over in a fiery display. Although bony, the fish is sweet and mild, and served up with drawn butter and sides of cole slaw, potatoes, and macaroni salad.

Since nightlife in Door County involves either snuggling beneath a blanket and watching for shooting stars, or catching a double feature at one of America’s few remaining drive-in movie theaters, it’s a great romantic getaway. Gay-owned Chanticleer Guest House in Sturgeon Bay is the perfect place to rekindle your romance or have a commitment ceremony.

Not just for couples only, Door County is also a great place to take the kids camping, or spend an outdoorsy weekend with friends, biking, fishing or playing golf. Just remember to check the weather forecast—and pack as though it’s going to be 10 degrees colder. (doorcounty.com)