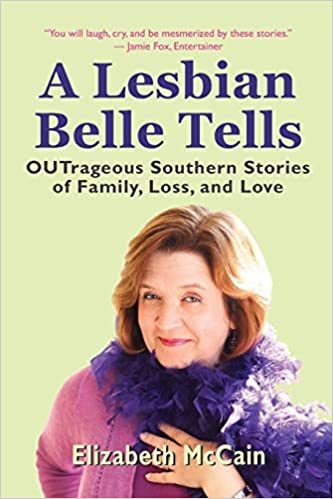 Interesting memoirs of a Southern lesbian

This memoir is written in the form of a series of short stories, each a snippet from the author’s life. It’s based on the author’s one-woman play, A Lesbian Belle Tells: OUTrageous Southern Stories of Family, Loss, and Love, which played at various fringe and Pride festivals in the United States.

Each story gives a look into her experience of growing up in Mississippi, coming out in DC as a lipstick lesbian, dealing with what her sexuality meant to her and the people around her, experiencing her family’s rejection, and eventually finding a peaceful place in her life, with a long-term partner and a welcoming community.

While the stories aren’t necessarily in chronological order, like a true biography, they can either be read as a single narrative, from start to finish, or easily dipped into at random. Every story is important to the author’s journey into firstly discovering her sexuality, and secondly being truly comfortable with it. Her upbringing, in a very traditional, religious Southern family, clearly had an enormous influence on her, and although comfortable with the lesbian label fairly quickly in her coming out process, it was obvious she struggled with some internalized homophobia from that upbringing. Certainly, being rejected by most of her family when she did come out didn’t help things, and I’m sure many of us can relate to aspects of that story.

It’s not all emotional pain though—there are definitely some bright spots that lighten the load of the issues surrounding her family. She had a couple of aunts who were much more supportive, and found over the years various communities who welcomed her in. She explores many themes around the idea of belonging, and of what community can mean to different people. She also writes a lot about her spiritual beliefs—she stepped away from her traditional church upbringing to follow many other paths, and it’s clear those have played an important role in her life, and in coming to be comfortable with who she is.

The writing style is easygoing and generally paced well, with only a couple of slow points or places where it was a little stilted. The main downside for me was the humor that other reviewers have mentioned as a true highlight of the book—this was somehow lost on me. Maybe it comes across better when performed live, with the author’s voice emphasizing and inflecting the key punchlines.

Overall, it’s an interesting read, though, with lots that people can relate to with their own histories and coming out stories.