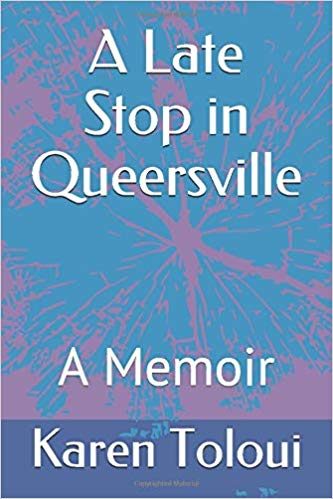 Honest, interesting story of coming-out in your fifties

I’m always intrigued when someone not in the public eye publishes a memoir of their life. Someone none of us know, and therefore we have no pre-conceived notions of their life or personality. This one was especially interesting because this story of their life starts at the point when they are about to turn fifty.

Karen is a suburban college instructor who, without ever having been attracted to women before, suddenly finds herself involved with a former student, Marianne, who is half her age. The relationship develops from a friendship into intimacy. At the same time, they’re both still involved with the men in their lives – Karen with her second husband, Marianne with a long-time boyfriend. For Karen, getting involved with Marianne is eventually the catalyst for ending her marriage.

After Karen and Marianne split up, Karen realizes that she would probably prefer to be with women, and sets out to meet, date, and, she hopes, fall in love with another woman. But this proves difficult for two reasons. One, the community is not so welcoming to older women just discovering their queerness, and two, this was back in the days before Internet, and meeting potential partners was done either by taking out a personal ad in an LGBT newspaper, or plucking up courage to hit up the bars and clubs.

After a few disastrous affairs and short-lived relationships, Karen eventually meets a woman called, funnily enough, Karen, and although there’s a few bumps on their journey, they end up in a fully-committed relationship that lasts many years. Double tragedy strikes, however, with a death in the family and then Karen (her partner) being diagnosed with ALS.

There is a lot going on in this book. I suppose you could break it down into three main parts. Firstly, there’s Karen’s realization and acceptance of her changing sexuality, and the trials and tribulations that entails. Like most of us when we first come out, whatever age that might be, there’s some heartbreak and hardships, and it’s easy to sympathize with her in those struggles. Next comes her time with Karen, and dealing with Karen’s illness (and eventual death). It’s such a sad ending to a lovely romance, and although it’s hard to read, it doesn’t shy away from the reality of that experience. And lastly, there’s the process the author has to go through after Karen’s death, her acceptance of her bisexuality, and the decisions she makes about how she wants to live the rest of her life.

While I commend the author for her honesty throughout the book, some of the things she did will raise a few eyebrows with the readers (CW: cheating). Sometimes the book is a little slow, bogged down in too much detail of events that could be summarized. Having said that, the first part in particular is a fascinating insight into what it was like trying to come out at that time, and at that age.

Overall a good read, and definitely if you’re interested in hearing stories of pre-Internet LGBT life.