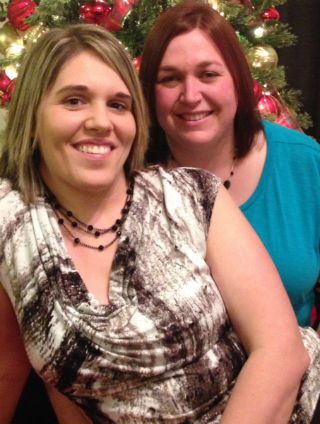 Courtney Blanchard is 30 years old and hails from the small town of Raceland, Louisiana, about an hour southwest of New Orleans

Blanchard and her wife have recently joined the first federal lawsuit against the State of Louisiana fighting for marriage equality in the Deep South. Blanchard has decided to take on this fight because for her, the personal is also the political.

“On Aug. 30, 2013, in a short ceremony at a law office in Clinton County, Iowa, I made a promise to my wife for a second time. This time was different but just as meaningful as the first. In front of our parents, our family and friends, I made that promise the first time at our commitment ceremony in May of 2012. The difference this time was that finally, although hundreds of miles from home, we were legally married in the eyes of the law—at least under the laws of Iowa and the Federal Government. That joy was short-lived as we returned home to Louisiana and the reality hit us. That piece of paper meant absolutely nothing in our home state.”

Blanchard met her wife, Nadine, right before Christmas in 2009. “Little did I know that she would become my wife, my soul mate, and the mother of our child in just a few short years,” recalls Blanchard. “Quickly, we realized that our hopes, our dreams, and our goals were all the same. I had always dreamed of having children, but never really thought it would actually happen, but in November 2011 we made the decision to have a child together.” And so the couple investigated vitro fertilization, using Courtney’s eggs, an anonymous sperm donor and Nadine carrying the child. “We found that this is the route best suited both of us,” says Courtney. “It gave us both a very connected role in our child’s birth.”

On May 2, Courtenay and Nadine felt elated as they left their doctor’s office in New Orleans with the knowledge that they were going to be parents. In spite of their worries—being good parents, being accepted as a lesbian family—they were determined to raise the child with complete commitment. They would “stop at nothing to make sure he was raised with great values and compassion for others.”

Five days after Christmas in 2012 they were blessed with “a beautiful, perfect, baby boy. We fell in love instantly and our lives changed completely the second he was born. All of sudden, it wasn’t about just my wife and I. We had a child, a real live person, to protect from this sometimes cruel world. He was our miracle, our blessing, and our baby boy!”

But they soon found out how this cruel world could be. Even though biologically he was tied by blood to Courtney, she had absolutely no rights to him. Nadine’s name was the only one allowed on the birth certificate in Louisiana—in that state, only one mother can be listed on a birth certificate.

“Some people ask me why we are fighting for our rights here in Louisiana. The answer is simple: My family is no different than yours. We make decisions together, we live together, and we love together. We want our marriage recognized so that we have the option for things such as joint adoptions and plenty of other benefits that heterosexual couples receive in their marriages. So when people tell us that the South is not ready for this, I just ask them, Will they ever be ‘ready’ for change?”