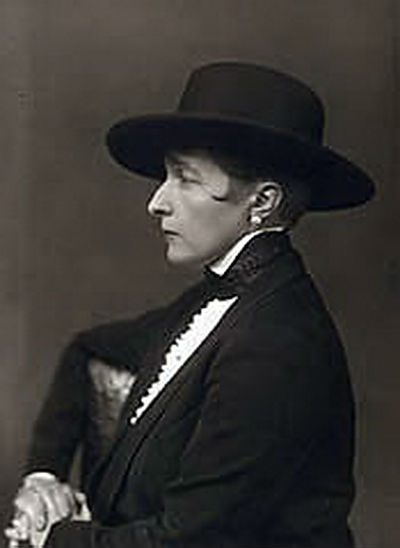 Radclyffe Hall was more than a lesbian trailblazer; she was ahead of her time.

When discussing the topic of lesbian history, it would be impossible not to mention the incomparable Marguerite Radclyffe Hall. She is, without a doubt, one of the most heralded and memorable figures in all of lesbian culture. Her novel, The Well of Loneliness, should be required reading.

Hall was born in England in the late 1800s and is widely recognised as a trailblazing writer and poet. She was unapologetic about her sexuality and wore it like a badge of honour, which was unheard of in the early twentieth century. In short, Hall was ahead of her time. She was also quite the charmer, and was involved in more than one scandalous affair in her lifetime.

It is understandable why Hall’s legacy is synonymous with tales of romance, sheroism, and seduction. She oozed lesbian and gender-bending confidence during a time when the rest of us would have hidden in the closet fearing ridicule and backlash. This is part of what makes Hall so intriguing.

The other part is her writing.

Hall wrote a handful of novels, but The Well of Loneliness is the most recognisable and, sadly, her only work of lesbian fiction. The plot revolves around a single main character, Stephen Gordon, who is painted as a lesbian with masculine traits and tendencies. Though it is not sexually explicit, the novel’s subject matter was not well-received by any means. It was banned in the United Kingdom, and many copies were destroyed. Eventually, it was published in the United States after a long and tangled court battle.

While there are many (many) notable quotes from The Well of Loneliness, this one is perhaps the most profound in terms of homosexuality:

“You’re neither unnatural, nor abominable, nor mad; you’re as much a part of what people call nature as anyone else; only you’re unexplained as yet – you’ve not got your niche in creation.”

Hall’s legacy continues to be honored by the lesbian community in a variety of ways. There have been books written about her and her life; pennames of authors using a play on her name; and clubs, organisations, bands and community groups named after her. The analysis of her work and writing is also endless.

The Pink Paper listed Hall at number 16 in a top 500 lesbian and gay heroes list. In our list, she’d defintely be in the top five – perhaps even number one.