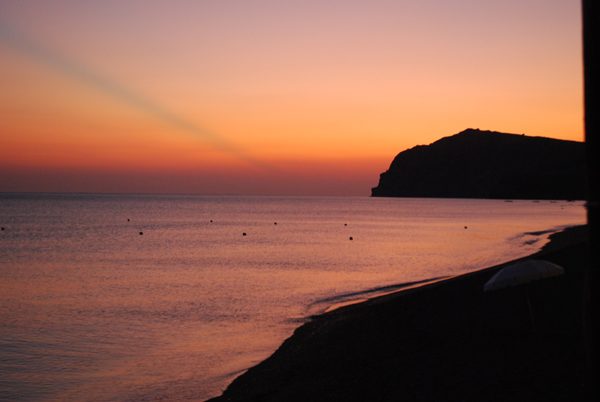 No summer vacation plan yet? Have a travel itch that you haven’t found the time to scratch? Why not soak up some sun and some ancient Sapphic history with a trip to none other than Lesvos Island, Greece Home of Sappho, the 7th century B.C. lyrical poet and notorious lover of women. The term Lesbian (which already refers to all residents of the island here—even the men) became a term for women loving women thanks to many of her poems which focused on women as the objects of her love. In fact she wrote so eloquently on the subject that famed Greek philosopher Plato later referred to her as the Tenth Muse.

Women—lesbians in particular—have been flocking from around the world to Sappho’s birthplace on the island, a small village called Skala Eressos, for decades. In 2000, thanks to a small, hardworking office known as Sappho Travel, the International Women’s Festival was officially born.

“The annual festival provides the opportunity for local and international musicians, artists, performers, entertainers, scholars and therapists to share in the practice, performance and appreciation of women’s talents with enthusiasts of all ages,” says Wendy Jansen, Sappho Travel accommodation manager and tireless festival organizer. “The event has become considerably important to the economy of Skala Eressos, since the extension of the tourist season is extended for an extra month every year, directly benefiting all businesses in the village that rely on tourism as a source of income.”

That’s right ladies, this is no lesbian-only party, at least on the surface of things. The festival takes place smack in the middle of a functioning tourist town, interspersed amongst heterosexual couples and little kids and grannies and grandpas. And nobody on either side seems to mind. The locals seem to respect that the far corner of the beach is the ladies’ nude section, and festival-goers usually flock to the three or four lesbian-operated village bars and cafés (of which one is cleverly named the Tenth Muse).

At the festival’s opening gala last year—a fantastic beach party featuring dancers, musicians and theatrical acts onstage—older folks and little kids sat front and center to catch the action, not seeming to even notice the occasional female couples kissing around them. After they all went home, however, with Holland’s incredibly funky DJ Promiss rocking the stage under the moonlight until the wee hours, the vibe in the village was definitely all about the ladies—and for the duration of the festival, things stay that way.

There’s plenty more to do—besides all the bathing in the buff. For me it was a swim out to the village’s famous rock, followed by a triumphant climb to the top with two women I befriended in the water along the way; a guided hike around the periphery of the village, where we picked and ate fresh olives and figs; and a mesmerizing, unforgettable concert under the stars by Savina Yannatou, a famous Greek folk singer who traveled from Athens just to be part of the festival.

This year’s event, scheduled for Sept. 4-18, promises even more excitement than usual as it is the festival’s 10th anniversary. Whether your thing is browsing crafts from the women artisans for that perfect souvenir, watching a film showing in the village’s outdoor theater, taking a Greek dance lesson, attending a healing arts or writing workshop, watching (or performing in) a cabaret show, indulging in a cruise or beach volleyball game at sunset—or countless other ways to spend your time on this exquisite island—you are certain to leave with both priceless memories and new friendships with women from around the world. Not to mention that you will definitely be thanking yourself for postponing those vacation plans. And if things don’t work out for this summer, you can start saving up now for next year!

Information, schedules, and bookings from Sappho Travel available at the official festival website, womensfestival.eu. Don’t wait too long, however, as the office gets swamped just prior to festival time. Special event discounts available for festival volunteers!