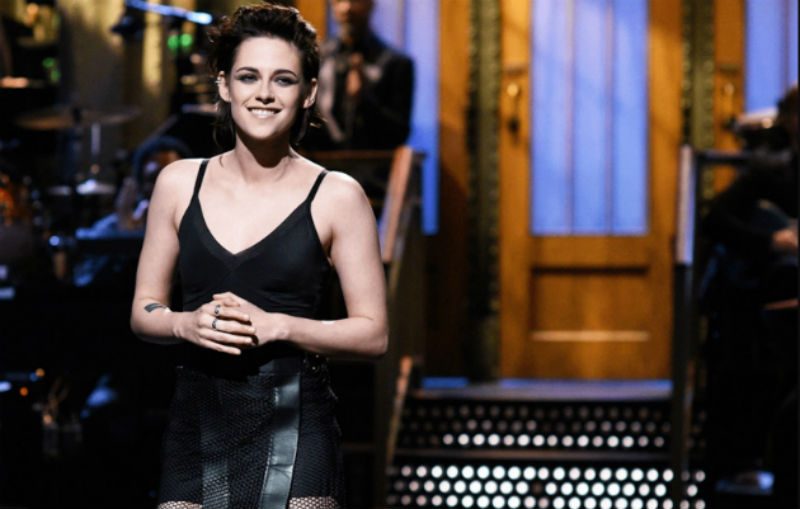 She discussed her sexuality, Donald Trump, dropped an F-bomb, and shared a steamy kiss.

On this week’s episode of the popular sketch comedy show Saturday Night Live, Kristen Stewart shared the stage with Kate McKinnon and Aidy Bryant during her opening monologue.

Kristen began by poking fun at her popular film Twilight before saying “I’m a little nervous hosting because the president is probably watching and I don’t think he liked me very much. This is how I know.”

She discussed how Donald Trump became obsessed with her relationship with fellow actor Robert Pattinson before presenting Tweets that the 45th President had sent out.

Robert Pattinson should not take back Kristen Stewart. She cheated on him like a dog & will do it again–just watch. He can do much better!

Kristen also sent a message to the current president saying, “Donald if you didn’t like me then you’re probably really not going to like me now because I’m hosting SNL and I’m, like, so gay, dude.”

Up until now, Kristen has never openly discussed her sexuality, usually telling people to “Google her” if they are curious.

Becoming so excited at the end of her opening monologue, Kristen said, “This is the coolest fucking thing and…” before catching herself.

Kristen also performed in a skit on the show where she played the sister of a guest attending a Super Bowl party. At the party, Kristen’s character shares a passionate kiss with the host’s wife before re-creating the infamous drawing scene from Titanic.

Watch the full monologue below!