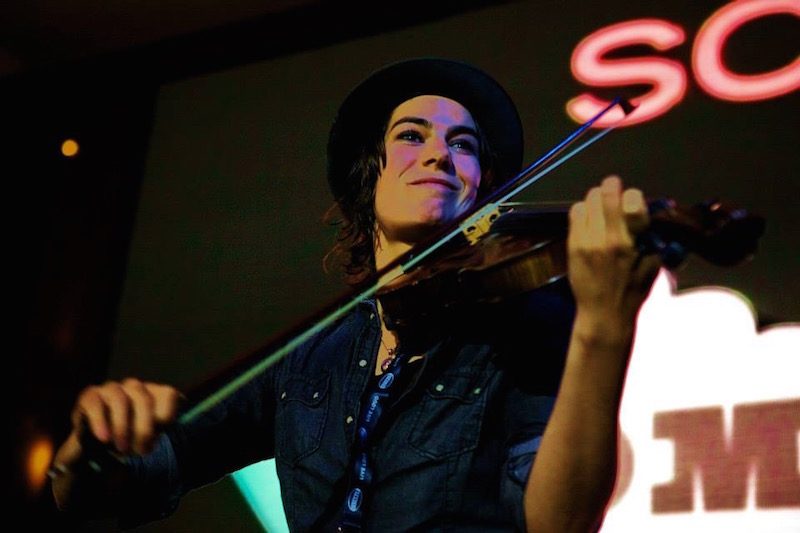 We’re big fans of violinist/fiddler Kelly Halloran, which is why we were thrilled to find out she’s in town and playing at B'accino in London this week. We seized the opportunity to catch up with one of our fave live performers and grill her about her career, her music and her advice for fellow musicians.

DIVA: For readers unfamiliar with your work, how would you describe what you do?

KELLY: Well, I'm a multi-genre violinist/fiddler typically hired to play in someone's band or accompany a singer/songwriter. I play a five-string electric/acoustic violin and patch it through different pedals like a wah-wah or loop pedal. I play in different bands with styles including rock, jazz, blues, reggae, folk, and pop and I also try to tie in classical and middle-eastern styles into my parts. Strings can be really versatile so I love to exploit that, musically.

We're excited that you're performing at B’acino. What can we look forward to about this night?

If you like strings, old jazz standards and wine and cheese, you can look forward to all of that. Might be a good night to take a date to. It's a different show for me because I'm playing solo so I'll be playing a lot of guitar and singing and violin to some tracks and loops. It will be mostly acoustic covers ranging from jazz standards to modern pop so feel free to come say hey and make song requests. B'acino is so beautiful so I'll just be adding the music to an already gorgeous and lush venue.

Sounds heavenly. What do you love about performing live?

When I'm playing music, I imagine I'm making the soundtrack of that moment for people. I want to play songs that they'll recognize and love. When performing with bands I'm always playing what I want the violinist or fiddler to play. It's exciting. I love the whole process!

Now let's go back to your roots. When did you first start playing the violin?

When I was four. Props to my parents for making me stick with it when I wanted to quit, years of lessons, and trucking me around to classes and orchestra rehearsals and recitals.

What’s been your career highlight so far?

When I get back to the States next week I'll be jumping on the tour bus with Michael Franti and Spearhead and doing a week out on the west coast with those guys. That will probably be the next highlight. I've had the privilege and honor of, through really being in the right place at the right time, performing onstage with some incredible musicians that I'm a fan of: Tom Morello (Rage Against the Machine and Audioslave) and Jackson Browne (Alongside Liah Alonso in our female rock duo: Left on Red), Paolo Nutini, G Love and Special Sauce, Michael Franti and Spearhead, Pete Huttlinger (John Denver's Band). Those have all been exciting moments. I've also been touring  with NYC-based artist Rachael Sage – we've toured as an opening act for Howard Jones, John Barrowman, Judy Collins, Joe Longthorne, and Rhydian here in the UK and that's been a major highlight.

Tell us about the funniest or most unusual gig you've ever played?

Hahah – I've been making a living with music since I was 18. In the beginning I had moved from a small town in Massachusetts to NYC and was making rent by playing in the subways and central park every day. Out here in the UK you've got a lot of great subway/street performers ("Buskers") and it's growing, but 10+ years ago in NYC there weren't many other 18 year olds down there playing violin so I guess that was unusual. I learned about getting robbed, freezing to death, and connecting with people. I went from that to joining a string trio in the Atlantic City Casinos and playing every weekend in Caesar's Palace going around to dinner tables taking all the Italian repertoire requests while wearing a toga (not my idea). I learned about Frank Sinatra and the mob.

Wow! So from all your years of experience, what advice would you give readers who want to pursue a career playing music?

Ah man. Here's a cliche and crucial piece of advice… create and share something you love. Do it soon because we all can't wait to hear it. From a technical standpoint, check out your favorite artists and strive to produce on their level in every way – performance, technical ability, image/branding etc. This is the advice I try to give to myself so maybe it speaks to you too.

You can see Kelly perform this Thursday 7 September at B’acino in Shoreditch.