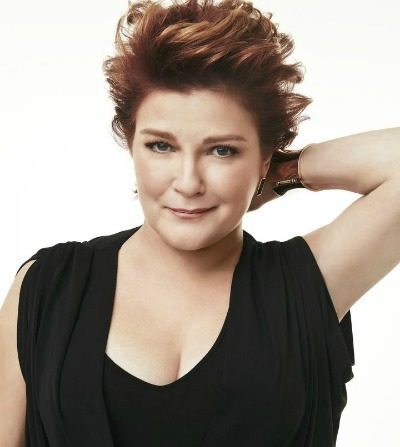 OITNB’s Head Chef talks onscreen diversity, Middle America’s resistance to LGBT people and how she feels about being a lesbian icon.

In the flesh Kate Mulgrew is everything you want her to be: poised, intense and fiercely intelligent. She leans in to draw you under her spell, her voice gravelly and full of gravitas. Her opinions are incisive and compelling. Oozing old school theatricality, she slips into Red’s Russian growl when she talks about the character. In short, she’s awesome. Here’s what she had to say.

I love Orange Is The New Black because of the diversity of women it portrays. What’s that like for you as an actor?

Kate Mulgrew: It’s invigorating. See I’m a white, middle class girl so I’ve never had a problem with this. But most of these girls are of colour and have not had a shot. Constantly scrambling, lots of rejections, so the set has an energy that’s raw and it’s represented as soon as they open their mouths. I think what’s jumping across the screen is the truth.

OITNB is also incredible for its representation of the gay community. What do you think about the current situation in America for LGBT people?

Never forget that we’re primitive people. As animals, every herd will protect its own until the bitter end and this is an intrusion the likes of which the greater herd does not want to deal with at all. I mean just look at civil rights, come on. So transgenderism alone, that’s going to take a long time. It works in the metropolitan areas. We’re having the conversations. But in Middle America, we’ve still got a long, long way to go. That’s why this kind of a voice is very important.

Absolutely. Kate, you’ve been popular with queer women for a long time – [Kate played the Star Trek franchise’s first female captain, but if you’re reading DIVA chances are you already know that.]

Captain Janeway! They love her!

We do! So who’s tougher – Red or Janeway?

You’d have to say Janeway. She broke the ultimate rule. She went to the Delta Quadrant. Janeway was an ardent and passionate scientist of the first order. She exercised the prime directive as none of the male captains had ever done before.

What was it like playing such an iconic and inspiring character?

When Paramount had the balls to put a female in the seat of a multi billion dollar franchise, they risked everything. I didn’t know that it would affect the scientific community, these young women coming out of the MIT going down to NASA, as directly as it did. I went to Washington and spoke to women in science because Mrs Clinton invited me. Nothing can be more gratifying in any career than to see this. Red is rich for me the actress but Janeway was really gratifying for me, the person.

And how do you feel about Janeway making you a lesbian pinup?

I feel very flattered. I really do because women are tougher than men. They’re more discerning. They’re more critical. Men are more simple. You just give them a little head rub. But the women, to get the women to like you, to admire you, means that you’re doing something right.

It’s true. We’re fussy and we chose you. I’ve been listening to the audiobook of your memoirs, Born With Teeth, because I wanted to hear them in your award-winning voice. You’re a beautiful and brutally honest writer. What was it like putting your life experience down on paper?

It was hard and it was good. Harrowing. Deeply rewarding. In the moment you’re in the process. You don’t realise how deep you’re going. But months later I saw there were repercussions to that process. I think that any writer worth her salt will pay the price. Honesty’s a big part of it. If you want to make a beautiful sentence, it must be rooted in something that is at risk. Otherwise, why would you bother to read my book? I could just write some bullshit thing in the National Enquirer.

I’m glad you didn’t. And finally the question we all want to know – what can you tell us about Season 4?

It’s ruthless and it’s huge. I call it tsunamic because it is. We don’t know how big this wave is and then we’re under the wave and it’s too late and who will survive this? Stay tuned.