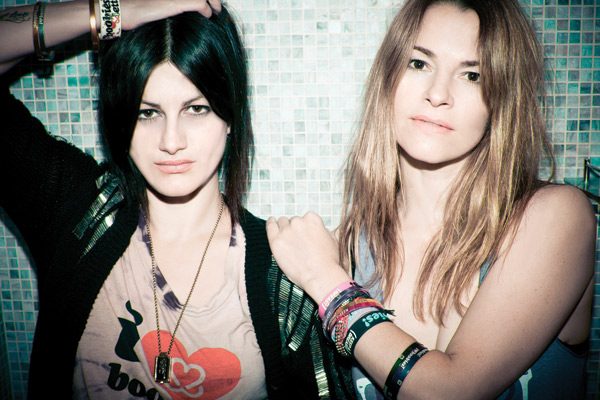 Leisha Hailey and Camila Grey on their new EP, heading back to The Dinah and the truth about that Southwest Airlines flight.

Camila Grey adjusts the volume on her phone and clears her throat. “Our coffee maker just exploded,” she says. “It went horribly awry and was leaking everywhere. Leisha’s cleaning it up.”

Since they charged onto the scene in 2007 on the heels of bassist Leisha Hailey’s role as Alice Pieszecki on Showtime’s The L Word, Uh Huh Her have done more than their share of cleaning up messes.

From a breakup with their label, to Grey’s shoulder surgery in August, the duo has continued to release moody, emotive electro-pop to a largely receptive audience.

But despite the new EP, a headlining gig at this year’s Dinah Shore in Palm Springs, and legions of devoted fans singing their praises on message boards around the world, one specific incident continues to haunt the band and it doesn’t seem to be going away.“It was the worst week of my life,” says Hailey of her and Grey’s September 2011 forcible removal from a Southwest Airlines flight for an alleged kiss they shared.

“We weren’t kissing,” says Grey. “That was the whole point. I’m super shy to begin with. She gave me a little peck on the cheek. It wasn’t even on the lips. I’m a fiery Latina. I’m the one that got angry, not Leish. In fact, she was the calm one in that scenario. I’m kind of bummed.  I actually would have loved to shove my tongue down her throat and have that be warranted.”

“Cam got very upset,” agrees Hailey. “I got upset as well but I’m more level-headed, so I tried to talk calmly with the people who were bringing us off the plane.”

The incident came on the eve of a U.S. tour that should have galvanized the artists as a formidable synth-rock outfit with a tight live set, interesting and unique dual vocals and well-muscled production by the very competent Grey.

Instead the pair were treated to a public lesson in homophobia.

“The stewardess came up and said ‘This is a family airline!’ It was so upsetting on so many levels. It was the first time that I had ever been discriminated against,” says Grey.

Hailey immediately fired back on social media site, Twitter. “You were very new and you didn’t understand the power of the Tweet, I don’t think,” Grey says to Hailey. “I was like, ‘Go out there and vent,’ and so she did.”

Multiple media outlets picked up the story, running full-page photographs of Hailey with little to no mention of the band. “The news referred to her as ‘the actress Leisha Hailey,’ I didn’t really take any of the heat like she did,” admits Grey. “We woke up the next morning and on The Talk, they were talking about it. This giant picture of her face was on the TV. Who knew the power of Twitter, right?”

“In my eyes it has been the most disgusting thing that’s ever happened,” says Hailey.