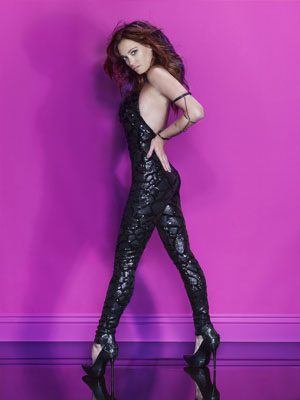 The former Pussycat Doll talks about her upcoming performance at Club Skirts presents The Dinah.

Admit it: You sang along and loved the song Don’t Cha back in 2005. You know the one. It was the hit by The Pusscat Dolls which asked, “Don’t you wish your girlfriend was hot like me?” Perfect song to get your scandalous self on. The Pussycat Dolls performed that very song at The Dinah in 2006.

Back to heat up Club Skirts presents The Dinah is none other than former Pussycat Doll Jessica Sutta, who’s on her way with a highly anticipated debut album set to drop in mid-2012. Sutta will be kicking off the week in Palm Springs at Zelda’s Nightclub on Thursday, March 29, 2012.

We caught up with the former Doll to talk clubs, girls and what we can expect from her appearance at the biggest lesbian party to hit the planet.

We hear you still love the club. What’s the best thing about being on the dance floor?

I love to dance. And I love it when a club takes you away to a whole other world. Getting lost in the music is my favorite thing.

What was the best part of being a Pussycat Doll?

I don’t know if there was just one thing that was the best part of being in the PCD. I loved it all. But I must admit the one thing I miss the most is getting off stage, getting on the bus and watching a movie with Kim, Ash and Mel. We built such an amazing sisterhood. I love them so much.

What did you learn about women from working within a girl group?

I learned how to have patience and room for different personalities. It was an amazing experience to work with such strong, fearless women.

You recently said that you like to write about love in your songs. Are you a hopeless romantic?

What are you expecting from Club Skirts presents The Dinah?

I performed with PCD at Dinah a couple years ago. It was a blast and I can’t wait to do it again! I’m so excited for this show!

What can the girls expect from your show?

Hot sexy fun. And I’m planning to cast some hot women to dance next to me.

Check out Sutta’s #1 single Show Me, which is off Sutta’s upcoming debut album.