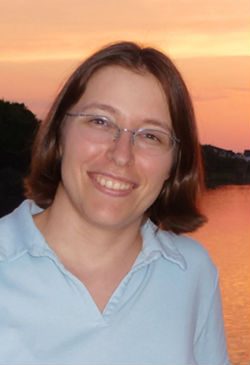 Jae is the award-winning author of lesbian romances such as Backwards to Oregon, Second Nature, and Hidden Truths

Last year, her first contemporary romance, Something in the Wine, led the lesbian fiction bestseller lists on Amazon for five weeks in a row.

2013 was a very good year for Jae too. Despite many people saying that you can’t make a living as a novelist and certainly not from writing lesbian fiction, Jae is about to leave her day job as a psychologist to write full time.

In Backwards to Oregon and Hidden Truths, she created characters that belong to the all-time favorites of many readers and described life on the Oregon Trail in 1851 to a T. Surprisingly, though, Jae lives in Germany and, so far, has never been to the US.

We wanted to know how she—as a German—came to write in English and what the secret of her writing success is.

Jae, tell us a bit about yourself and your life in Germany.

I live in the southwestern corner of Germany, close to the border to France and Switzerland. It’s a beautiful area, famous for its wine, and it’s called the Tuscany of Germany, since we get more sunshine than the rest of Germany.

Right now, I still work as a traffic psychologist, but I will give that up to write full time and work as a part-time editor at the end of the year.

Why do you write in English?

When I first started writing lesbian fiction, there were very few German writers writing in that genre and very little interaction with readers. I longed for a network of readers and writers as it existed for English-speaking authors. The lesbian fiction community in the US and in other English-speaking countries seemed to offer so much more support and opportunities to grow and improve my craft than writing in German could.

So I tried my hand at writing an English short story, and I got wonderful feedback that encouraged me to keep writing in English. The rest, as they say, is history.

When you write a story that will be published in English, e.g., Backwards to Oregon, do you think in English or German?

I think in English. I found out early on that translating is hard work and it complicates things unnecessarily. It stops the flow of the writing. So I do all my research in English, I write plotting notes and character sketches in English, and I write the book in English. Right now, I’m in the process of translating Something in the Wine into German. It’s much easier than writing in German and then translating it into English.

Have you ever visited America?

No, I haven’t so far. I plan to fly to the US for the GCLS conference in Portland, Oregon, next year, though. I think that’s only fitting since that’s very close to where Nora and Luke ended up in Backwards to Oregon, the first novel I published.

Why do you think your books are such a success in the US?

I don’t think it has to do with the location. Some thing are simply universal. Readers all over the world appreciate my books for their lengths—I’m known for writing long novels of up to 150,000 words. That gives me the chance to develop the characters and their relationships at a slower, more believable pace. I try to breathe life into my characters by making them three-dimensional story people with a life outside of the novel’s events. They have a past, a family, friends, a job and hobbies. Most importantly, they are not perfect. They have their strengths and their flaws, just like any human being. Readers like characters they can relate to.

Who is your favorite character in all the books you have written? And which character do you feel you most relate to?

Oh, gosh. That’s like asking a parent to name a favorite child. If I absolutely have to name one, I’d say my favorite is Luke from Backwards to Oregon. Beneath her tough exterior, she’s just so honorable and tender that I can’t help liking her.

Well, I can relate to bits and pieces of all of my characters. For example, my professional life at the moment most resembles that of Dawn from Conflict of Interest (to be republished in spring 2014 by Ylva Publishing), who’s a psychologist, and Jorie from Second Nature, who’s making a living as a writer. I’m introverted like Annie in Something in the Wine, but I can also be a pretty social creature, just like Dawn or Nora from Backwards to Oregon. And I’m a born diplomat and can easily see things from other people’s perspective, like Kelsey from True Nature.

How does your degree in psychology help you with your writing?

I often think that a character’s journey in a novel is a bit like what my clients go through in therapy. Characters have to face old wounds and overcome their fears and flaws to have a happier life in the end.

Having an insight into the emotional struggles that people go through in times of change is a bit advantage.

Your latest novel, True Nature, is a paranormal romance. What do you feel makes True Nature unique from others in its genre?

In most paranormal romance novels, the main character is a dominant alpha type—someone used to taking charge and making decisions. True Nature’s main character, Kelsey, is exactly the opposite. She’s a submissive wolf-shifter, yet she’s forced to take charge and guide Rue, the novel’s human alpha character, in order to save Rue’s deaf adoptive son.

What have you found are the easiest and hardest parts of writing your books?

The easiest parts… Well, I would say these are the “candy scenes”—scenes that I look forward to writing from the moment I have the story idea. These scenes practically write themselves. And I also like writing witty dialogue.

The hardest parts for me are the love scenes. There’s so much going on, not just on a physical level, but on an emotional level too. As Jorie says in Second Nature: