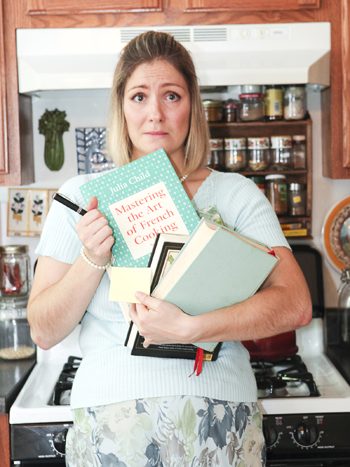 Check out this one-woman play doing its rounds in the kitchens of New York City.

In New York last fall, a friend of mine took me to a play in someone’s kitchen. The kitchen belonged to Sylvie Cranshaw for the evening, a disturbed and erratic Northern English housewife played by Laura Hooper.

Cranshaw inhabits the homes of friendly New Yorkers who are comfortable turning their kitchens into performance spaces for an evening. When I visited, the kitchen was a place down near Wall Street that Hooper whispered to me, “A bit posh for Sylvie, really. But she likes it.”

Cranshaw swoops in and makes their kitchen her own, telling her story to an intimate audience crowded in chairs around her. The audience becomes players in the fantasy of her own dark imagination that is fueled by her increasingly desperate and lonely existence.

A play that evokes feminist-requisite reads like “The Yellow Wallpaper,” Cranshaw is back with “Crumble” for a limited second season in New York City. Her delightful crumble – which she’ll share with you, while talking to you like you’re her favorite pop star – is more than worth the visit.

Laura Hooper, the one woman show who is Sylvie Cranshaw, sat down to tell us about the character who will be invading New York City kichens this summer.

When I met Sylvie she thought I was Whitney Houston, who looks opposite me in basically every way. What draws her to the fantastical?

Sadly, her reality. Sylvie is an incredibly lonely woman, a housewife who longs to be loved.

She lacks confidence and is repressed by an abusive marriage. By immersing herself in a fantasy land she can exist in a world where she is respected, appreciated and desired.

She is also a woman who enjoys titillation – a need which can be indulged in the world of romantic fiction!

I watched Sylvie cook crumpled-up notes into a meal to get back at someone. She seemed to do all her dirty work in the kitchen, actually.

She was brought up in a small community who believe a woman’s place is in the kitchen. Sylvie is a conformist in this respect, as she feels safe there.

I also see Sylvie as a traditionalist; a woman who thinks the way to someone’s heart is through their stomach! It is all she feels she has to offer.

But cooking is also an outlet for self-expression and creativity for Sylvie. She can let her eccentric side out and experiment…it is not all doom and gloom with Sylvie Cranshaw!

What have you learned from playing Sylvie?

I have developed empathy for women in her situation. Some years ago I found myself in an abusive relationship.

In a relatively short space of time, I managed to get out. I’ve experienced how difficult it is but for a while couldn’t understand why Sylvie stays with George.

I see now how impossible it can feel to do when you lack confidence, have no income and lack a support network of friends and family.

How did Sylvie end up in her situation?

The back story isn’t included by Mark O’Neil, the playwright. Interestingly, he wrote the piece as a response to the suggestion that he would be unable to write from a woman’s perspective.

I have come up with my own back story. I believe she met her husband, an older man, when she was only 17.

I see him as a controlling man who battled with alcohol abuse. He gradually stripped away her confidence and sense of place in the real world. As she became more withdrawn, she lost the strength to leave.

What’s great about performing this play in other people’s kitchens?

Having specialized in making site-specific theater in London for six years I see mainly props. I aim to put the audience experience first; their connection with Sylvie is enhanced by them being in her environment.

When they enter her front door, they are in her world, already – and literally – lived in, steeped in history. I believe it makes the piece have much more of an impactful.