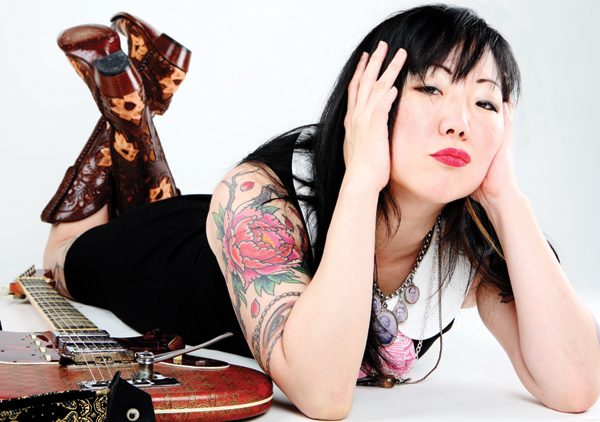 The funny lady gets serious about family.

For stand-up comic extraordinaire Margaret Cho, comedy it seems runs in the family. “My mom is so hilarious that I can’t help but feel it,” says Cho. “I don’t really even write about her. She just says stuff that I just steal off her.”

Family is important to Cho and she’s tight-knit with her parents, hubby and pets. A doting mother to her two gorgeous dogs, the Drop Dead Diva star sat down to talk about her musical inspiration, family life and marriage equality.

On your Cho Dependent tour you combined music and comedy. Will you continue to do that in future projects?

Right now I’m super focused on stand-up comedy and that’s where my heart is, but I love playing music. It’s something that is a part of my life and I guess even my music is stand-up comedy to me. It’s only part of what I do but I’m a comic so that’s always first.

Are there any musicians you’d especially love to collaborate with?

I love so many people. I’d love to do something with Linda Perry; we’ve discussed that and I think she’s just phenomenal.

I’d love to do something with JD Samson. I would love to do more with Kathy Griffin, more with Fiona Apple, more with Ani DiFranco, more with Tegan and Sara…these people that I listen to and love. I’m just so lucky.

Who are the furry members of your family these days?

I have two dogs, a Chihuahua-Pomeranian mix, she’s sort of everything, and her name is Gudrun. And there’s Bronwyn who is my Australian Cattle Dog mix and she’s just wonderful.

The connection between people and animals is so important and something that needs to be written about and talked about more. I love that I get to sing [“Hey Big Dog”] for my dog [who passed away].

I think all animal lovers can really relate to the tight communication that you have with your animals and the love that we have for each other. It’s really remarkable.

What’s the inspiration behind Gudrun’s and Bronwyn’s names?

Gudrun is the name of a Nordic goddess. I wanted to name her a very fierce, cute but strong name because she was small when I got her and I wanted something that was protective.

Bronwyn is an old Welsh name that I’m really fond of. I think it’s a really great, pretty name and she’s brown so it works.

You’ve been married 10 years. Has the experience been different than what you imagined?

It is and it isn’t. I think it made me realize that marriage equality is very important.

It made me realize that when people are married they become a family and that’s absolutely essential for everyone. The fact that gays and lesbians are not allowed to get married is just sickening.

How will we make marriage equality happen in this country?

I think it’s going to happen. It’s about really discussing it and that it’s not about marriage it’s about equality.

It’s not about religion or this expression of hatred in legislation. It’s about making sure that we have democracy and constantly emphasizing that.