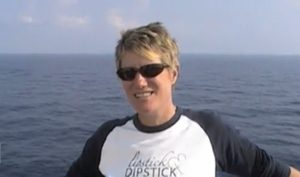 Lipstick and Dipstick's venerable butch advice guru, Dipstick (a.k.a. Kathy Belge) went topside on board Olivia's sexy Caribbean cruise where she and editor in chief Diane Anderson-Minshall hosted pool parties and poolside soirée's (one was rained out by some near-hurricane weather) alongside other sexy queer chicks, including Good Vibration's sexpert Carol Queen (we're  not worthy!) and the ever-amazing Wau Wau Sisters (you really appreciate acrobatic-musical-burlesque stars when they're helping you do dildo ring toss games in a pool on a moving boat). That was fun (so was the pass the sex toy without touching each other—can you see what kind of influence Queen has on us?). But the real joy was not in the games or the destinations (see Anderson-Minshall's article on the cruise, "Caribbean Queen") but in asking women on the cruise what kind of impact the now 37-year-old company (which started out as a record producer and 20 years ago year officially became Olivia Cruises & Resorts) has had on their life. See what these women told Dipstick (at least on the record—we didn't catch her on camera to find out what was whispered in her ear by all those hot singles on board).