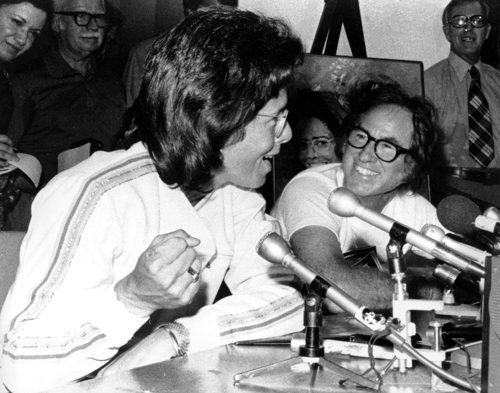 Tennis player Billie Jean King, left, makes a fist while she answers a question at a news conference in Houston, Tex., on Wednesday, Sept. 20, 1973. At right is Bobby Riggs smiling as King makes her answer. (AP Photo)

In a single tennis match, Billie Jean King was able to do more for the cause of women than most feminists can achieve in a lifetime.

On 20 September 1973 the largest audience in tennis history gathered at the Astrodome in Houston, Texas to watch two tennis world champions: Bobby Riggs, a 55 year old man and self-proclaimed chauvinist, and Billie Jean King, a 29 year old woman and trailblazing feminist, battle it out in one hell of a tennis match.

The game was televised to over 36 countries with an estimated audience of over 50 million. Although $100,000 prize money was up for grabs, this was a match where the stakes were much higher than money.

“I thought it would set us back 50 years if I didn’t win that match,” said King. “It would ruin the women’s tour and affect the self esteem of all women.” There was more on the line than just bragging rights for beating Riggs.

In the lead up to the match, Riggs, a tennis great from the 1930s and ‘40s, had spoken openly of his views on women, claiming that “the male is king” and that women belonged in the bedroom and kitchen. His consistent taunts led to two seminal tennis matches, man vs woman.

Not content in defeating the then current world number one, Margaret Court, in two games out of three, he further angled for a game against King; “Billie Jean King is one of the all-time tennis greats, she’s one of the superstars, she’s ready for the big one, but she doesn’t stand a chance against me.