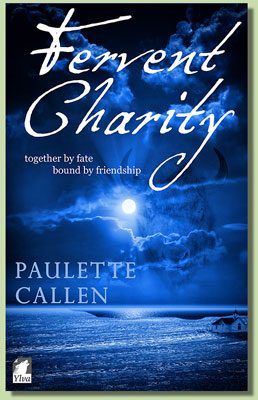 This is a sequel to Charity, a book I already raved about
Paulette Callen again lets us fall through the “rabbit hole,” and within the blink of an eye, the reader is totally immersed in the late days of the Old West in South Dakota around 1900. This time the reader finds herself in the town of Charity, participating in all ongoing activities, celebrations, catastrophes, and events of everyday life.
And again our favorite lesbian and two-spirit characters, Gustie Roemer, who helps with her Eastern connections, and Jordis, the Sioux, are right in the middle of it. There is not much emphasis on their on-going relationship; it is a given in this sequel, but the threats to it are the same then as nowadays: ruthless men are always willing to take what they think is theirs just for the taking.
The descriptions in this well-written book were incredibly vivid—well-drilling, a twister, child birth, the plague, and what not: Paulette has an incredible gift for resurrecting those times and the people with just the right amount of detail and for bringing them to life as if you were actually there without being scholarly, cumbersome, or boring. And even though real people were real people, i.e. good, bad, and indifferent—the novel shows the indomitable spirit of those settlers of old, be it “Indians” or European, be it gay or straight.
This is a great sequel, and though it helps to know the characters from Charity, it’s not a necessity. Reading Charity wouldn’t be a hardship, though, since Charity is a masterpiece as well with its nearly poetic praise of the prairie and its settlers.