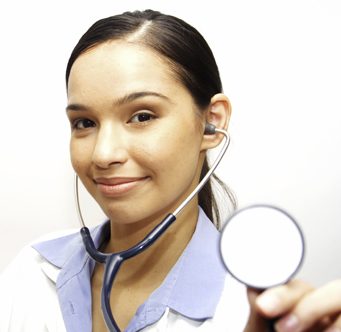 Power to the not so patient people.

I got a call from a friend’s dad the other day, asking if I could put on my (figurative of course) nurse’s hat and answer a few questions for him.

On the surface, he seems like the kind of guy that would get excellent health care effortlessly. He’s an older, straight, attractive by conventional standards, gender normative, fairly wealthy, extremely well insured white guy. Conjure up a picture of “the patriarchy” in your mind and you’ve pretty much got a likeness of Mr M.

But when Mr. M called, he was in the hospital with a number of alarming symptoms, in pain and utterly confused. Tons of doctors and other health care providers had been in and out of his room and one of the doctors who saw him had suggested he have a particularly unpleasant and invasive test. Mr M had agreed, even though it was unclear why he needed the test. I asked him why he had consented and he said—with no apparent hint  of irony– “because the doctor said so.”

As perfectly illustrated by Mr M’s dilemma, health care providers have a great deal of unearned power. Medical self advocacy is about taking this power back from providers and putting it in the hands of the the folks it affects most: patients. Some tips on how queerfolk can make this happen:

First, avoid getting routine care alone.  Perhaps you needn’t take your entire softball team to a routine gyno appointment (you are getting routine gyno care aren’t you? If you’ve got girl bits, they need to be checked out, whether you love them or hate them). However, if you are going on a first visit with a new provider, it doesn’t hurt to have a friend or partner in the waiting room.  This is especially true if you are seen as gender variant, have a heavily modified body, scars you’d rather not discuss, etc. Anyone who encounters difficulty in the way their body is seen (and often pathologised) by providers should develop a “queer body” buddy system. You will get better care if you take someone with you. You’ll have a witness, someone to help you speak up, and even hold your hand if needed.

Second, when dealing with the hospital or the emergency room my advice goes from “avoid getting care alone” to “never ever ever ever ever under any circumstance, please swear on Harvey Milk’s grave that you will not go to the hospital without accompaniment” Hospitals are busy busy places, populated by often overworked, underpaid staff and people possibly much sicker than you. Take one friend who can advocate for good medical care and another friend who can get you cold orange juice. The staff will not have time.

Third, don’t assume that a healthcare provider  is your enemy until they’ve proven themselves to be. It’s hard not to be defensive, especially if you’ve had bad experiences in the past but providers are technically members of the helping professions, right? Give them a chance to help you before you pathologize them as homophobic. They might surprise you. And, if not? That’s where showing up with the entire softball team comes in.