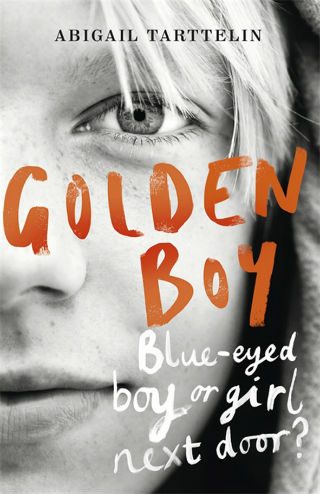 Written by rising actress and writer Abigail Tarttelin, ¢â¬ËGolden Boy’ has been deemed a brave and important book.

I first heard about ‘Golden Boy’ through my sister, who had overheard two workers in a bookstore slagging it off (so to speak) for its controversial themes. My sister’s interest was piqued and she went home and ordered it online, read it, loved it, made me read it. No spoiler alert required because in the very beginning chapters of this contemporary novel we come to learn that Max Walker is intersex.

Born with both male and female genitalia, he is neither truly male nor female…he is both. At fifteen, Max currently presents himself to the world as male and is the attractive, blonde-haired, bright-eyed, unthreatening boy at school. Often described as “pretty,” he is also intelligent, athletic and super sensitive. You know, the type all thegirls go gaga for. He thus makes for an appealing and highly likeable protagonist.

As well as chapters told from Max’s point of view, the novel alternates between the different perspectives of five other, deeply drawn characters and the author manages to shift from these differing points of view effortlessly. I found thiskept the narrative structure fresh and very easy to read. Jumping from character to character we hear from; Karen, Max’smum. Steve, Karen’s husband and Max’s dad. Daniel, Max’s younger brother who is kind of a weirdo but in a totally loveable way (and whom adds acomic element to the story). Sylvie, the quirky girl at school that doesn’t quite fit in. And the local doctor Archie, through whom we learn from the medical fieldabout intersex people. Of course there is one more character hugely important to the storyline. The only other person who knows Max’s secret, his childhood best friend Hunter. Someone who Max is beginning to realise might not be a very good friend after all.

Written by rising actress and writer Abigail Tarttelin, ‘Golden Boy’ has been deemed a brave and important book. Tarttelin is clearly a thoughtful writer that engages the reader by taking them on an emotional journey in which the usual angst and heightened emotions of adolescence are coupled with Max’s search for identity and his constant struggle as an intersex to define himself. But you need not be intersex to relate to Tarttelin’s thought-provoking novel. With passages like, “It takes strength to be proud of yourself and to accept yourself when you know that you have something out of the ordinary about you”, the main theme she is addressing is that of diversity.

In exploring what it means to be different, I believe that many in the LGBTQIA community will understand and find similarities to Tarttelin’s story. Though controversial for its theme and a rather explicit scene in the third chapter (I heard that a bookstore refused to stock it because of this particular scene – though after having read it myself I find this a rather melodramatic reaction!), the author also addresses the more general themes of family, the stress of motherhood and the pressure to conform.

I found ‘Golden Boy’ a highly moving, informative and relatable read. As the first novel I had ever come across and read on the topic, it both opened up my mind to the world of an intersex person and appealed to my heart. I applaud Abigail Tarttelin for her fearless writing and for bringing a story on the complexity of sexuality and gender into contemporary, mainstream literature.