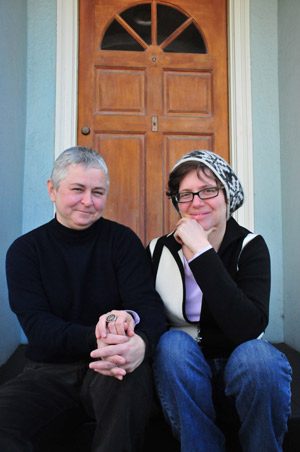 Can discrimination strike when buying a house? It sure can, so read on for some insider tips on how to make it a little easier.

Can homeowners refuse to sell to lesbians? Yes, they can. Unless sexual orientation is specifically mentioned in state or local laws, there is no insurance against discrimination.

However, most blue states have passed anti-discrimination laws, and, even in red states, money speaks louder than sexuality.

“In a slow housing market, any offer is better than none. My job is to ensure an offer is evaluated based on price and terms, not on sexual orientation,” said Keller Williams realtor Eileen Duff.

According to a nationwide survey commissioned by the Kaiser Family Foundation in 2001, 34 percent of the gay people surveyed had been turned away from renting or buying a home because of their sexual orientation.

In Columbus, Ohio, Allstar 1 realtor B.J. White, while helping an interracial lesbian family look for a home in the suburbs with a good school district, was followed by the seller’s mother from room to room. “She must have thought, ‘They can’t be serious. They can’t possibly afford this house. Are they casing this house?’ It was awkward for everyone,” White said.

Another time, White was driving a lesbian couple to tour homes when they came upon teenagers playing football in the street. Upon spotting a pink triangle sticker on the car, the teens started taunting “fat dykes, fat dykes,” and blocked their passage for several minutes. When the women departed, they left the house and the taunts behind.

Beverly Balliett and Ruth Szilagyi wanted “joint tenancy with right of survivorship,” when purchasing their first home in Phoenix, ensuring that if one of them died, the other would inherit the property. That right was reserved for married couples only, they were told. “We refused to sign until they changed the language—which they did,” Szilagyi said.

San Francisco couple Thea Gray and Jeanine Mattson introduced themselves by letter to try to sway the seller’s decision in their favor. It worked. After Gray and Mattson moved in, the neighbors commented they were hoping for an interracial couple, as they already had a lesbian couple. “It turned out the neighbors are one of the best assets of where we live,” Gray said.

According to San Francisco attorney Sally Morin, “Property owners, landlords or realtors who do not follow anti-discrimination laws face legal and financial consequences.” To find out if the law protects you, go to fairhousinglaw.org or lambdalegal.org.

Katherine Holland is a lesbian real estate agent with Coldwell Banker, specializing in residential and investment properties in San Francisco. She ranks as a top 100 agent city-wide.