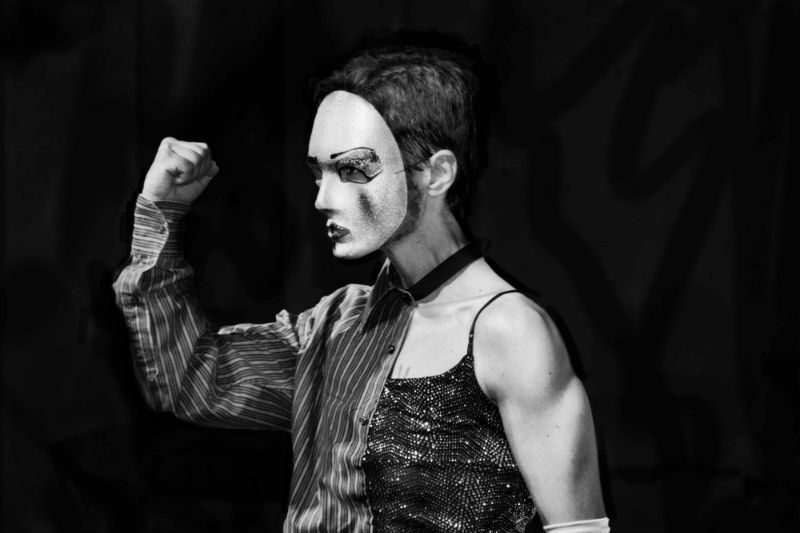 Three years ago I wrote about Eyes Wild Drag, an Italian group that explores gender identity through performance, for the print version of Curve Magazine. At the time members Senith, Spruzzy, and Bianco were making incredible strides to smash perceptions of gender and identity for people in Italy. How they’ve taken those queer beginnings and ran with it was more than I could imagine.

Shortly after publication Eyes Wild made their way to the United States for a multi-city tour, moving through New York City, Philadelphia and Washington D.C. This included a stop at Stage Left Studio while in the Big Apple. Artistic Director, Cheryl King loved their brand of performance art and said, “Eyes Wild Drag brings a Euro sensibility to gender fluidity. These professional gender benders endow their performance with lush sensuality and rich humor. Think Dietrich, Joel Gray, mixed with a little Sophia Loren, and you get an idea of the heady, ironic sexuality they embody.”

Indeed, their style has evolved into polished, multi-layered bites of entertainment that blend the physical comedy, whimsical outlandishness and deep sensuality I get from my favorite Italian films and actors, within the in-your-face attitude of the drag performance tradition. Watching them is like seeing a mashup of Charles Busch, Hedwig and “8.5.” The quality of their work is on par with anything I’ve seen in Under the Radar, BAM Next Wave and other cutting-edge theater festivals. It’s really only a matter of time before the performance art and experimental theater worlds catch up to them.

When Eyes Wild returned to Rome after their tour they had more connections with artist’s abroad and they used that to enrich their programs. Their relentless activism and producing is a tremendous feat, considering that, as we all know, the political and economic picture in Italy hasn’t been rosy. Incredibly, this hasn’t seemed to slow Eyes Wild, who’s following and cultural contribution only continue to grow. The Culture Sociology Department at La Sapienza University in Rome started a course for first year students about queer critical metrology and Eyes Wild participates in that curriculum. They present workshops and lessons to the students. The faculty, as you can imagine, is up in arms about the course, but the students love it. With that same university department and Linguaggi del Corpo they created SovverTango, to explore gender roles and relationships using both drag and tango as mediums to do so.

The gender workshops that Eyes Wild conducts with the public continue to attract loads of people, including three university researchers — MichelaBaldo, RacheleBorghi, Olivia Fiorilli who pushed forth a book about the history and projects of drag kings in Italy, particularly Eyes Wild, called Il Re Nudo. It’s the first time that an Italian publisher took on such a radical book. You can get your copy here: http://www.edizioniets.com/Scheda.asp?N=9788846738271-A

Eyes Wild continues to bring the Victoria faux queen party to cities around Italy, Florence, Rome, Bologna, Milan and Sassari (Sardinia). Sharyn Jackson and I co-founded Victoria at the Stonewall Inn, so I was enthusiastic to help bring the concept to Rome in 2011. We had no idea that it would be so enduring and popular! This evening of performance features a “style station” where attendees have the option to receive a drag makeover. Thousands come through the door for the chance to imbibe in this gender play.

The Victoria party has most recently evolved into an event called Queerrida, that’s like for queer performance art America’s Got Talent. The audience goes crazy for it and the winner is included in GendErotica program, which gets bigger every time. This biennial, multi-day event includes performances, art installations, workshops, photography, painting and films to explore queer femininity. The trio manages to bring artists from outside of Italy, and produce and partly finance the festival themselves. I asked them: “What drives you to put in so much effort?”

Spruzzy is resolute, “It’s one drop in the bucket of real change.”

It’s the belief in the power of art to open people’s minds that leads these three incredible queer artists onward. Maybe you want to jump along for the ride? Visit their website for performance dates if you happen to be in Rome, and ways to get involved if you can’t hop across the queer rainbow descending onto Italy.