Aviva Minc’s interview with LOTL uncovers her passion for cooking and LGBQTI issues.

AVIVA & CO. set out to raise funds for a food truck to bring Jewish Eastern European Street Food to the streets of Melbourne, and also heal the world one dish at a time.

Although just under $13, 000 was raised, without hitting the tipping point, unfortunately none of the funds were received. Never giving up and stating on her social media sites “It aint over till the fat lady sings and the fat lady aint sung yet,” less than a day later, Aviva Minc, founder and cook of AVIVA & CO. announced that a Plan B was on its way.

In November 2014, Aviva Minc launched her street food concept at the Batman Market in Coburg, Melbourne. Thanks to 22 generous individuals, Aviva was able to purchase necessary equipment and start her business.

50 cents from EVERY MEAL sold by AVIVA & CO. went to a charity organisation close to Aviva’s heart. She has openly shared her own experiences in life with suicide, depression and violence through her campaign, which makes her cause even more candid and courageous. Statistically, 7 lives are lost each day in Australia as a result of suicide and the statistics for suicide within the LGBTIQ youth are even more alarming: 30-40% have attempted suicide and are 4 times more likely to do so than their heterosexual peers. Moreover, 1 in 3 LGBTIQ people experience domestic violence or family violence.

Aviva plans to work her way towards her food truck dream, having the faith to make a difference in her community through doing what she is passionate about. She is a business woman, who is courageously following her passion in life and wanting to do some good. Aviva has been cooking since she was eight, coming from a Hungarian and German family who established their life in Melbourne when her grandparents migrated here after surviving the Holocaust.

LOTL had the opportunity to ask Aviva a few more questions about her experiences:

What’s unique about your food and how will it help ‘heal the world’?

In Melbourne, you need to travel to the south to Caulfield, Balaclava, Elsternwick or Bentleigh to be able to get any Jewish food. There might be a few places around the CBD that I’m not aware of, but any time I want ingredients, or to buy Jewish food, I need to travel 45min one way to get it.

Jewish Eastern European food is not something that many may have had the opportunity to try – because it’s not so readily available everywhere. In New York, it’s really wide spread, and it’s known because it’s more a part of the American Culture. But in Australia, not so much. And I want to make it more so.

My food is comfort food. And it’s good! What’s unique about it is that it’s the real home cooked meals that you’d go to your parents to eat. It’s made with love and is made for the soul. Most people know the foods but may not associate them as being “Jewish” food. And other foods are more unknown but curious to people.

My hero dish, Jewish Chicken Soup, is known everywhere as Jewish Penicillin. It’s as much a part of the day to day life in the Jewish community as is having a shower. Everyone makes it. Yet no one is selling it in its authenticity. I make the soup for family and friends all the time. And if someone is run down or sick, I’m the first to put a pot of boiling water on the stove and make a batch to take to them, because it can cure anything, from the common cold to the broken heart! Even scientifically now, they have found so. Cooking is my way of showing love.

My food heals those that eat it, makes them feel loved, and welcomed at my table (or food truck) and is also passed forward to continue healing to those charities I donate to.

Where did your idea about creating a food truck come from? 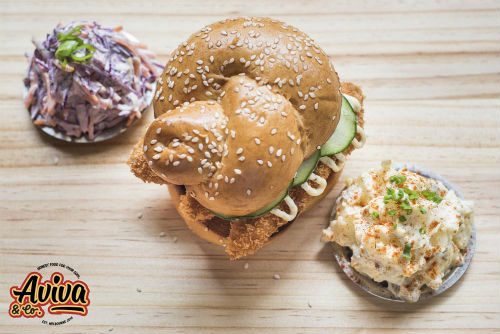 The idea of a food truck came from seeing all the food trucks in the USA. It’s really a big part of the culture over there. I saw a few popping up here in Melbourne over the past few years and I thought that the concept was perfect for getting down at a root level to be able to sell my food to people on the streets. It suits my personality too. I’m very grounded. There’s no BS and what you see is what you get. There is something raw and rugged about the food trucks. Something that they represent about feeding people, handing out food from a truck window. Seeing people eat my food and enjoy it. I just love it. And it’s also something that has never been done with Jewish Food before. There’s no other Jewish Eastern European Food Truck around in Melbourne, possibly Australia wide. So it’s a great way that I can literally ‘bring’ the food to the streets of Melbourne where it hasn’t been before. And bring it north of Balaclava & Caulfield to people who haven’t had the opportunity to try it.  I hope they fall in love with it.

I also really love the concept of being able to bring a food truck to where the people are: to carnivals, events, markets, to your house to feed you.

Could you talk a bit about the importance of help and support when dealing with violence and bullying, particularly within the LGBTIQ community?

We are really lucky these days with all the media on the awareness / prevention of bullying and violence. There is a shift in our culture as a whole, although moving slowly, that violence is not ok, and that bullying is not something that you ‘just go through at school’ and is normal. So I’m really happy about that. But we have a long way to go still, and having support like the Gay & Lesbian Switchboard, Lifeline, ACON, and so on, makes available resources to people that already feel isolated or alone.

Mainstream media rarely includes the LGBTIQ community in their campaigns. It’s always male and female relationships and mostly female victims. Organisations within the LGBTIQ community that make themselves available to people who may be experiencing violence or bullying is so important in helping save lives. It can happen to anyone. No one is immune to it. We either know someone who has experienced it, have experienced it ourselves, heard about it or seen it happen to someone we don’t even know. You can be rich, poor, married, single, young or old, any gender.

The LGBTIQ community was the first community I felt a part of. Even though I am Jewish and grew up in a Jewish community, I never really felt like I belonged. I was the renowned black sheep, and it was always uncomfortable because I didn’t find my place.

I love what the LGBTIQ community represents. Diversity. That being different is awesome. We all know what it’s like to face discrimination and to be the minority. So there is this unspoken camaraderie and fight that we all have – well that’s what I feel anyway.

There’s a UK web series/documentary called Loud, Proud & Jewish – where LGBTIQ identifying Jewish people in the U.K. tell their own stories of growing up gay in the Jewish community. What has your own experience with this been like?

I haven’t seen the series, but have heard of it. I didn’t come out till I was about 23 years old. But I did begin questioning my sexuality from the age of 16 or 17. I remember feeling the absolute terror that I might be a lesbian. The conversations in my head, and it only exasperated my already ‘outcasted’ feeling of not fitting in at school, or uni, or in my culture.

Being Jewish and Gay back in the late 80s and early 90s was not something that I had even heard of. I honestly – and I say this very seriously – thought I was the ONLY Jewish lesbian. I didn’t know how to be a part of my Jewish community when I didn’t even know of any other lesbians or anyone that was gay. It is a well known fact that our community is secular, and although I didn’t grow up in a religious family, it was still very traditional and so were the people around me. Conventional.

Having already had my confidence stripped away for being bullied so badly in school for being overweight, I didn’t have the confidence to embrace who I was for years, until I did eventually come out. It was nothing special when I did though, the typical responses you hear from others, my mother wondering and asking herself what she did wrong, and fearing something she didn’t know or understand. She cried and it took some time to accept. My father immediately just said that it all made sense now, and had no problems with it. I lost a lot of friends when I came out, and lost a lot more as the years went by as I accepted myself and became more of the person I wanted to be.