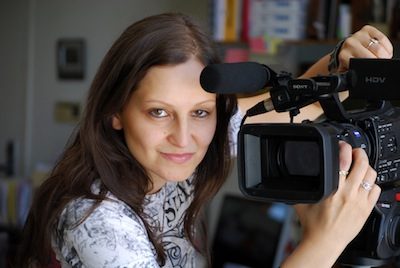 Rolla Selbak: “I wanted to create something entertaining, something inspirational, and something even a bit voyeuristic”

From Three Veils to Kiss Her I’m Famous Rolla Selbak proves to be a Jane of all trades in the filmmaking industry and now she brings us a documentary web series.

A new web series has created a stir in our lesbian community. Can you blame it? Filmmaker, Rolla Selbak is doing it again and we couldn’t be happier!

The new documentary web series entitled Grrl’s Guide To Filmmaking premiered on August 10th and has taken us on a journey to the ‘behind the scenes’ role of women in Hollywood. Selbak ventures to the sets, the writing rooms, and homes of some of the masterminds in the biz today.

If you don’t know who Rolla Selbak is, then shame shame. She has proven herself in the lesbian film circuit with such titles as Kiss Her I’m Famous, which provides us with plenty of LOL moments when two roommates and besties decide to create a fake sex tape to become famous and get some major moolah.

Selbak also wrote and directed the feature film Three Veils that stars Sheetal Sheth (I Can’t Think Straight, The World Unseen) and dives into the drama of arranged marriage, homosexuality and love within the Muslim-American subculture.

Now with her new project, Selbak offers her audience an in depth and exclusive look behind the scenes of five women working hard to bring us entertainment in Grrl’s Guide To Filmmaking and answers some questions behind the driving forces of the series.

What sparked the idea of having a docu web series dedicated to the behind-the-scenes aspect of women in cinema?

I wanted to create something entertaining, something inspirational, and something even a bit voyeuristic, to balance the negative and to show that there are thriving female filmmaker geniuses out there.

Films and web series. Do you have a preference as to which one you enjoy doing more?

Can’t lie, I love the instant gratification of pressing that upload button, and have my work be immediately served up to audiences in a pixeled platter! I love taking my time with the development of characters and stories, and because of that, series are such an intriguing proposition to me, web or TV, especially if you’ve hooked audiences to tune in episode after episode.

It’s a very different art form from feature films, where you’re constrained to tell a whole story within the construct of an hour or two. There’s always room for all types of mediums, it would be a sad state if we didn’t have feature films.

I just feel that audiences’ tastes have evolved with the landscape, and if the stories and characters are compelling enough, they want to keep tuning in and getting more, instead of the story ending in a short, finite period of time. Kind of like Scheherazade and the Thousand and One Nights.

Nothing feels better to me than when someone tells me they binge-watched one of my series. Basically, it’s an honor to be the reason why you were a little late for work.

Did anyone follow YOU around for this web series since you’re obviously a big contributor to lesbian cinema?

Only my cat. And even she was a bit reluctant, since a lot of the time she was in between baths.

No, but in all honesty, half of the fun of the series was just vlogging right to the audience, just me and my camera phone, giving a very real and intimate glimpse into my life as a filmmaker, as I visit my peers.