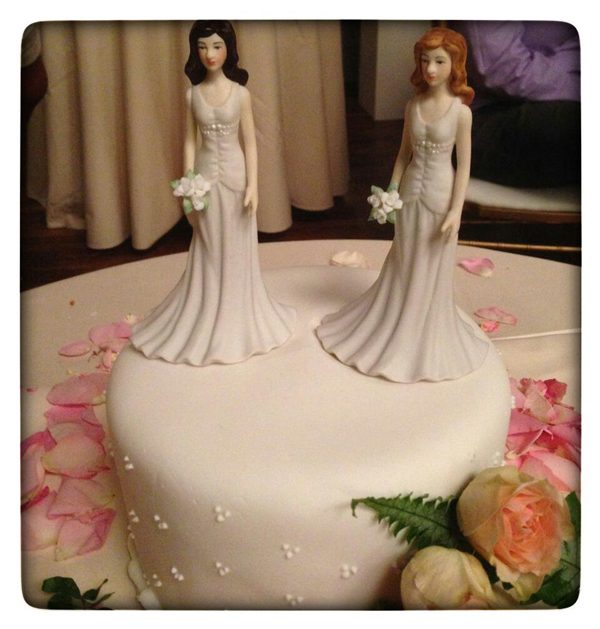 Win wedding cake toppers from the film, as well as a wedding album with photos from Jenny’s ceremony autographed by Katherine Heigl and Mary Agnes Donoghue.

A wedding, regardless if it’s between a man and a woman, two men, two women, or two people of any gender, is special. That moment when you’re exchanging your vows and looking into your partner’s eyes, committing to love them and telling them that you want to spend the rest of your life with them, it’s priceless. It’s pricesless, and it’s yours. That’s a moment that no one can take away from you, whether the law says it’s legal or not.

Jenny’s Wedding, a film revolving around a lesbian wedding, starring Katherine Heigl (Grey’s Anatomy) as Jenny, captures that moment. Jenny’s Wedding is a passion project written, directed and co-produced by Mary Agnes Donoghue, who also wrote Beaches and White Oleander. The film is about a conventional woman coming out to her conventional family in Middle America, and is loosley inspired by Donoghue’s niece, also named Jenny, coming out to her sister.

While shooting Jenny’s Wedding, the real-life Jenny, her wife and Donoghue’s family were extras in the wedding ceremony scene and got to watch as the cast brought back to life that special moment in their lives. The cake topper used for their wedding cake in the film is something that you can win, along with a signed wedding album with all of the photos from Jenny’s ceremony autographed by Heigl and Donoghue.

By donating at least one dollar to Jenny’s Wedding Indiegogo campaign to raise money for their soundtrack, and by sharing the campaign on social media, you can win the above prizes. Imagine going to the movie theaters with your fiancée this fall to see Jenny’s Wedding. You’re both watching the wedding ceremony scene, holding each others’ hands, and as you watch them cutting the cake, you realize that the cake topper you’re watching on the big screen is the same exact cake topper that will be on your wedding cake as you and your wife cut into your cake on your wedding day. That can become your reality.

Here’s how you participate in the contest:

By sharing Jenny’s Wedding Indiegogo campaign while logged into your Indiegogo account, the people you refer to the campaign and the money raised from your referrals will be tracked. Whoever raises the most money through referrals will win the wedding cake toppers prop, as well as the signed wedding album.

Why is this film important? This film isn’t only the story of Donoghue’s niece, it’s the story of women, as well as men, from across the world. By sharing Jenny’s Wedding, you’re supporting the people in our community, like Kate. Watch her video below, and help share not only her story, but many of our stories (Indiegogo.com/jennys-wedding).